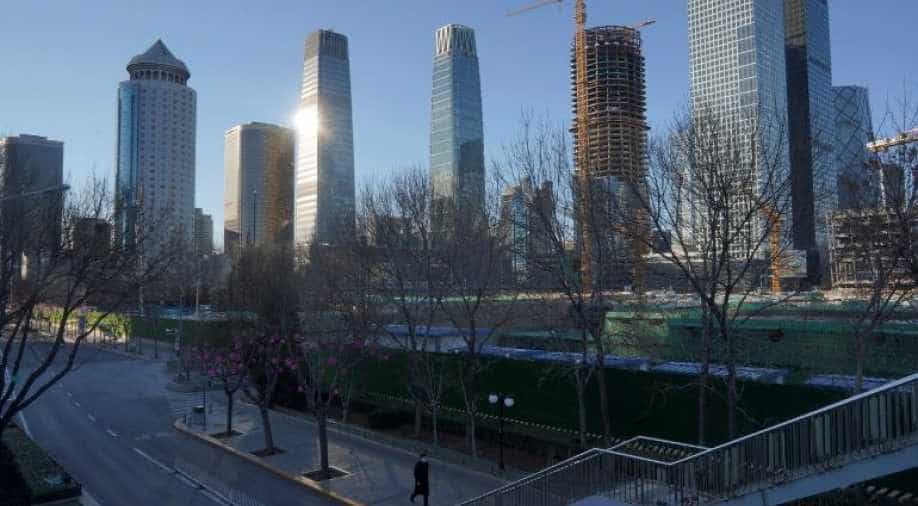 A man wearing a face mask walks on a street, as the country is hit by an outbreak of the novel coronavirus, in Beijing's central business district, China Photograph:( Reuters )

More than 50 companies, including Bank of Ningbo and battery maker Yinghe Technology, have published as of Thursday fresh or revised plans to raise as much as 73 billion yuan through private placements.

Listed Chinese companies are queuing up to issue shares and have already announced plans to raise more than $10 billion in the past week after fundraising rules were relaxed to help ease cash strains caused by the coronavirus.

More than 50 companies, including Bank of Ningbo and battery maker Yinghe Technology, have published as of Thursday fresh or revised plans to raise as much as 73 billion yuan through private placements, according to Reuters calculations.

The new rules allow companies to sell shares worth up to 30 per cent of their share capital via private placements compared with 20 per cent previously. The number of investors allowed to participate in such placements was lifted to 35 from 10.

The changes also make the deals more attractive to investors by halving the lock-up periods and enabling more flexible pricing.

The rush to market comes as China has been pumping liquidity into the financial system, cutting interest rates as well as easing other funding avenues, in a bid to limit the economic damage from the coronavirus that has killed over 2,000 people and stalled many business activities.

The share sales will also be helped by a resurgent stock market. The blue-chip CSI300 has rebounded roughly 13 per cent from a low hit on February 3 when traders returned after the new year break, compared with 3.8 per cent for the US S&P 500 benchmark over the same period.

"Investors are encouraged by monetary easing, and are looking beyond the epidemic," said Wu Kan, a portfolio manager at Soochow Securities Co.

Relaxation of the rules comes as a relief to many companies.

Banking systems may need help if handicapped by disruption from coronavirus lockdowns: IMF