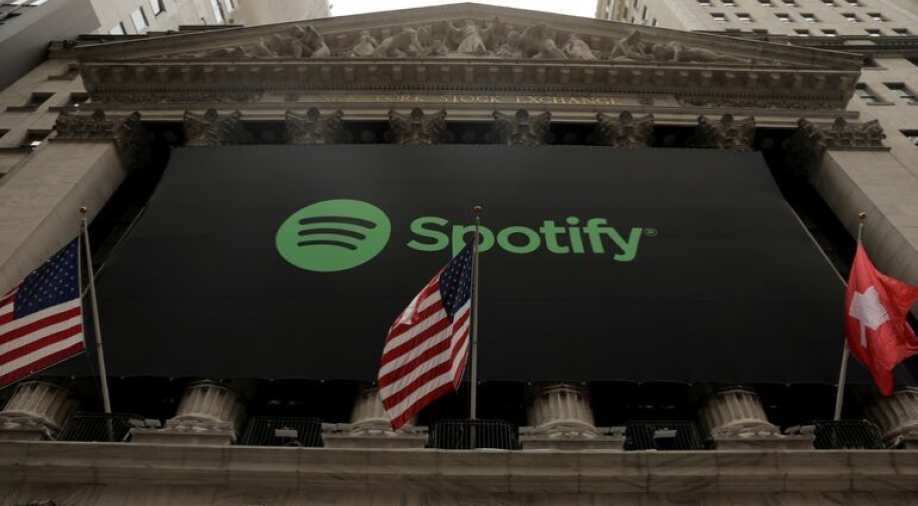 File Photo of the Spotify logo on the facade of the New York Stock Exchange. Photograph:( Reuters )

Spotify has been pressing for antitrust action against Apple for several years.

US lawmakers have requested information from Apple critic Spotify as part of an antitrust probe, according to two sources briefed on the investigation into allegations the iPhone maker engages in anti-competitive behavior to support its own apps.

The US House of Representatives Judiciary Committee reached out to the music streaming service with broad requests for information, according to one source, who added the request to the company was narrowed in follow up telephone calls.

Spotify Technology SA filed an antitrust complaint against Apple in the European Union in March, but the contact with the committee marks its first known participation in congressional inquiries into the iPhone maker, whose Apple Music streaming service is Spotify's biggest rival.

Spotify and other developers have alleged that Apple engages in anticompetitive behavior by imposing rules that hamper distribution via its App Store, the only way for third-party developers to reach more than 900 million iPhone users.

At the same time, Apple sometimes copies the features of their apps for its own offerings, developers have said. Multiple apps in the App Store offered female cycle tracking before Apple added the same feature to its own health tracking app this fall, for example.

Spotify has been pressing for antitrust action against Apple for several years.

Its representatives have met with Justice Department officials, as well as members of the FTC's Technology Task Force, a group of some 17 attorneys that was set up in February to focus on online platforms and other Internet competition issues, according to one source.

App developers also complain that Apple's Siri, which response to verbal commands and can control Apple's own apps, has long had limited functionality with the vast majority of non-Apple apps, including Spotify.

Apple announced an update to its software in June that would allow Siri to access Spotify and other music services.

Beyond Spotify, the congressional probe has tapped many companies for details on the four big tech firms.

In addition to the Judiciary Committee probe, the big tech companies face a plethora of other antitrust investigations.

The Justice Department is probing Alphabet's Google, Facebook, and Apple while the Federal Trade Commission is investigating Facebook and Amazon.com. Groups of state attorneys general have also been formed to probe Google and Facebook.

Spotify has complained also about the 30 per cent fee that Apple charges outside app developers who sell so-called digital goods such as music or e-books on the App Store, using Apple's in-app billing system. Apple bars app makers for collecting payment any other way on the App Store or showing users links or buttons to other ways to pay.

At one point, Apple told Spotify to stop sending emails to users who had just signed up for a free version of its streaming music prompting them to upgrade to the paid service, Spotify has said. Spotify has said the shifting rules, and Apple's threats to block routine app updates, have made it difficult to compete with Apple's own music service on a level playing field.

Asked for comment, Apple referred to its previous responses, published in March, to Spotify's claims. The company says it enforces its App Store rules evenly among all developers and that more than eight out of every 10 apps are free and pay nothing to Apple. Apple has said Spotify pays nothing for users of its free service or for paid Spotify members who signed up outside the App Store.

Apple has said Spotify pays a revenue share on about half a per cent of its 108 million premium users, paying 15 per cent fees on roughly 680,000 customers that Spotify acquired between 2014 and 2016 when it used Apple's payment systems.