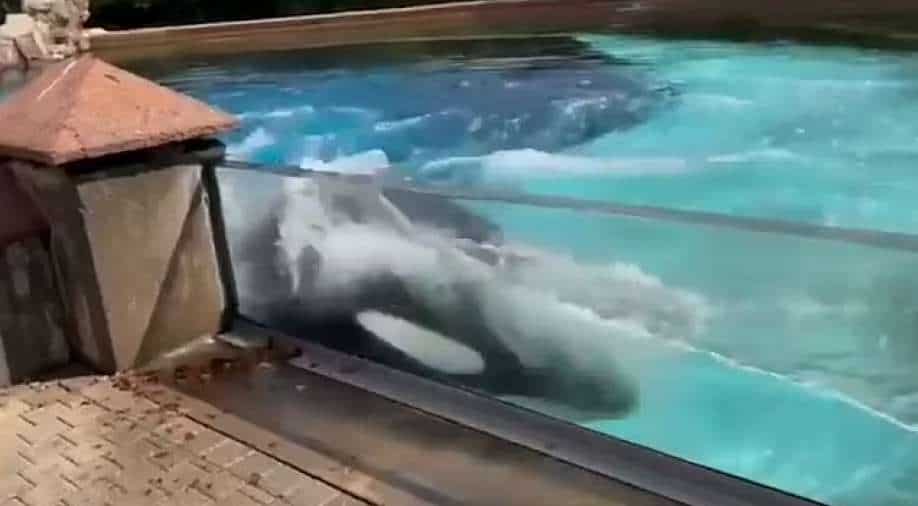 The orca has been dubbed by Whale Sanctuary Project as 'the loneliest whale in the world' Photograph:( Others )

The 44-year-old orca has spent the last 10 years alone after outliving her tank mates, including her five offspring.

In a heart-breaking incident, a “distressed” killer whale caged at a water park in Canada was filmed smashing her head against the side of the tank after outliving her five babies.

The 30-second clip was taken by anti-captivity activists at MarineLand, Niagara Falls, Canada, earlier this month and shared on social media.

The footage of Kiska, dubbed by the Whale Sanctuary Project as “the loneliest whale in the world”, was captured by anti-captivity activist and whistleblower Phil Demers, who used to work at the park in Ontario.

According to reports, the 44-year-old orca was born off the coast of Iceland and has been in captivity since 1979, according to Demers.

She has spent the last 10 years alone after outliving her tank mates, including her five offspring.

Killer whales are extremely social animals, which in the wild live in groups or 'pods' comprising of several multi-generational families.

“For over 40 years, she has suffered the loss of her freedom, her babies, and all of her tank mates,” British tabloid The Sun quoted UK-based Orca Rescues Foundation as saying.

“For the past 10, she has been in complete social isolation from others of her kind. This is what her loneliness, and her captivity, has done to her.”