World may need to conserve 30% resources to survive, if not thrive: UN report 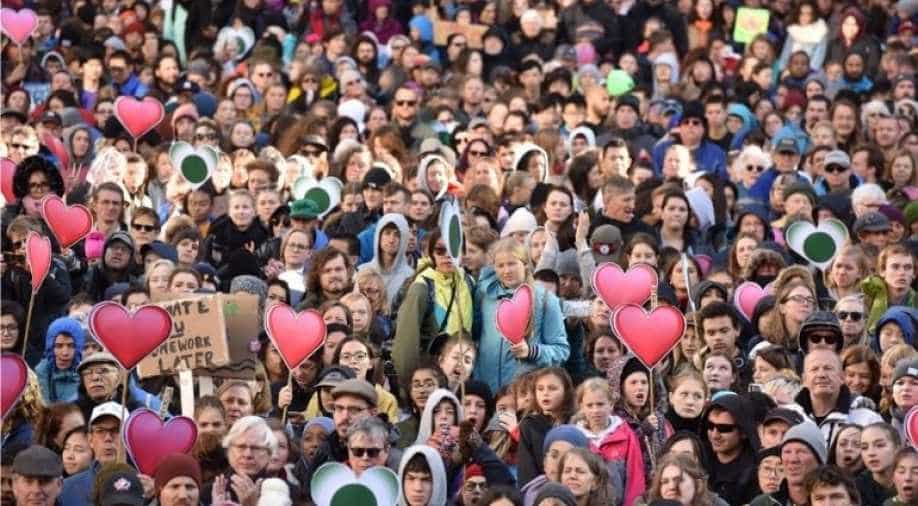 Thousands of hearts were displayed at a climate change rally hosted by Sustainabiliteens at the Vancouver Art Gallery in Vancouver, British Columbia on October 25, 2019. Photograph:( AFP )

The report, which was published on Tuesday also claimed that the destruction of nature may be slowed, and even reversed through conservation efforts

A new United Nations report claims that governments across the world have failed to conform to their pledges made a decade a go to protect wildlife.

The report, which was published on Tuesday also claimed that the destruction of nature may be slowed, and even reversed through conservation efforts.

Besides bringing to the light the inaction of world governments, the report also suggested changes to at least delay, if not stop climate change.

The changes were suggested in sectors like farming and urban planning, which could help save a million species.

Later this month, countries are going to meet for a UN summit on biodiversity, and may build upon this report to trigger future action.

The report added that making commitments are not enough, and that action on those commitments is pertinent to saving wildlife across the globe.

Before countries meet next year in China for a new wildlife pact, the UN has asked governments to set aside 30 per cent of the planet’s land and sea areas for conservation.

As of now, only 17 per cent of the world’s land receive protection. To survive, the world needs to protect 30 per cent resources.

The report also pointed to improvements in conservation. For instance, the Japanese crested ibis, which had almost vanished, recently started to produce chicks in the wild. Conservationists had released captive-bred birds, which may have facilitated this resurgence.

If it weren’t for conservation efforts, the number of bird and mammal extinctions would have been twice as high during the last decade.

The report also taken into account the effects of COVID-19 pandemic, and the impact of industrial society on the natural world.

The virus emanated from an animal, and could open up risks of more such pandemics jumping from animals.