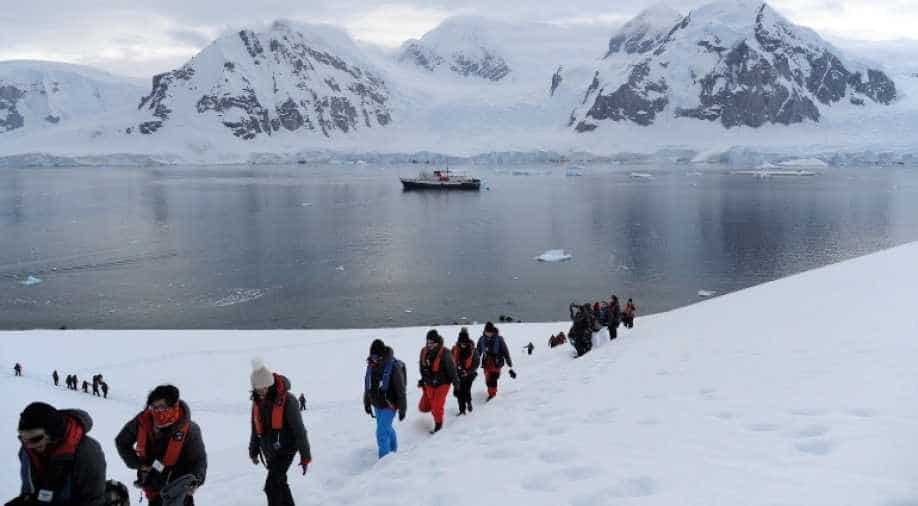 A picture shows the Homeward Bound group of female scientists, who participated in a 12-month global program created by Australian Fabian Dattner and supported by Spanish firm Acciona, during its annual Antarctic expedition. Photograph:( Agencia EFE )

According to the UN presently less than 30 per cent of researchers worldwide are women.

Nearly three hundred scientists gathered in a global program for the planet are trying to promote a "big bang" of women in science, in order to motivate more girls to take an interest in this field and advance in the struggle for equality and visibility.

Data presented by the United Nations on the International Day of Women and Girls in Science on February 11 reveal that, despite the international effort over the past 15 years to promote women's participation in science, they continue to face barriers.

"When I was pregnant they did not renew my temporary contract and many potential employers told me that I was not suitable for fieldwork or that because I had to take care of my family I would not meet the deadlines," explains Australian Beth Strain after returning from a trip to Antarctica under the women's leadership program Homeward Bound, in which EFE also participated.

"I submitted hundreds of job applications and spent approximately two years looking for work as a researcher," added the marine biologist, who is currently a lecturer at the University of Melbourne and a driving force for green development in her country.

Strain's experience is shared by many of the nearly 300 engineers, doctors, astronomers, biologists and mathematicians in the global Homeward Bound program, who nonetheless see it possible to overcome obstacles with three objectives: becoming visible, working together and impacting the world.

"I still remember the first conference I attended: I almost ran out, seeing only old men in the same dark suits," says Danish Mette Hoe, a leader in the transition to electric transport in her country.

"But, on closer inspection, I discovered that the key to them was networking. I focused on it, I made mistakes like almost everyone else, but I improved, and today strategic networking is a central skill in my leadership role," the 45-year-old expert explains.

The main objective of the Homeward Bound program, of which these scientists are part, is to create a network of 1,000 women of different ages and nationalities within ten years, in order to address the low representation of women in leadership positions and in the same field of science.

According to the UN, " at present, less than 30 per cent of researchers worldwide are women. According to UNESCO data (2014 - 2016), only around 30 per cent of all female students select STEM-related (Science, Technology, Engineering, and Mathematics)fields in higher education."

"I've never doubted the potential of women in science, but we've been losing that potential inside a leaking pipeline, where the higher the academic level, the fewer women we find," says Daisy Hessenberger, a 29-year-old Austrian geneticist and passionate member of the International Union for the Conservation of Nature (IUCN).

That dropout, according to engineers Kristen Howard and Kelsie Clarke, can be attributed to factors such as job bias, in which a man is more likely to be hired than a woman; the gender pay gap, which increases with age, race or disability; or the difficulty of being both a scientist and a mother.

In line with the goals of Homeward Bound, which already includes scientists from some thirty nationalities, including Spanish and Latin American, the UN is promoting this year's campaign "Investment in Women and Girls in Science for Inclusive Green Growth."

The theme is part of the International Day of Women and Girls in Science, in which it has been stressed that future work will be driven by technology and innovation and if inequality in the field of STEM is maintained, the overall gender gap is likely to widen.

Homeward Bound, a 12-month program created by Australian Fabian Dattner and whose annual ending has taken place in Antarctica with the support of Spanish firm Acciona, provides participants with tools to improve their leadership style.