With Texas’ mask mandate over, workers worry about encroaching virus 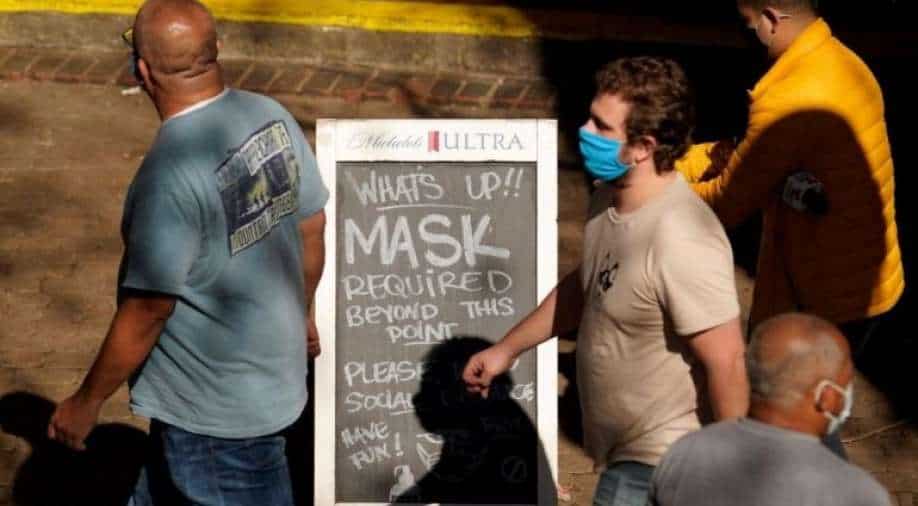 People outside a restaurant in Texas Photograph:( AFP )

When Gov. Greg Abbott of Texas announced last week that he was loosening restrictions across the state, he inflamed a tension that officials have wrestled with from the outset of the pandemic, having to balance tough measures to curb the coronavirus’s spread with the economic anguish wrought by those measures

As rules that had been in place for months were relaxed across Texas on Wednesday, Plexiglas barriers came down, tables were added onto the floors of restaurants, and signs requiring masks were removed from the front doors of businesses.

On South Padre Island, throngs of spring breakers drank and danced at a beachside bar, and in a move that harked back to pre-pandemic times, the Texas Rangers announced that when the baseball season starts next month, they would allow the stadium — 40,518 seats — to be filled to capacity.

But Britt Harasmisz, who tends the patio bar at Barflys in San Antonio, kept her mask on even after a co-worker removed the sign — “MASKS REQUIRED UPON ENTRY” — that had been posted outside since June. As much as some hoped otherwise, Harasmisz said, normalcy had not returned.

“A lot of people have been vaccinated — Governor Abbott was vaccinated,” Harasmisz, 24, said. “But a lot of us on the front lines have not.”

When Gov. Greg Abbott of Texas announced last week that he was loosening restrictions across the state, he inflamed a tension that officials have wrestled with from the outset of the pandemic, having to balance tough measures to curb the coronavirus’s spread with the economic anguish wrought by those measures.

As the pendulum has swung in Texas, many workers — in supermarkets, restaurants, bars, retail stores and elsewhere — described growing frustrations and fears as the quandary played out in their own lives with consequences that were devastatingly real. They were the ones losing tips or hours of work, if they did not lose their job altogether. But they were also the ones who had to confront the customers refusing to cover their faces.

“We are in contact with people all day long,” said Rebecca Masson, who owns Fluff Bake Bar, a bakery in the Heights neighborhood of Houston, adding that she and her employees have not been vaccinated yet.

“Why are we wasting an entire year of working so hard for this?” Masson, 48, said of the months of precautions she and her staff have taken to avoid the virus. “I have employees, and they have families,” she said. “It is not just me I am thinking about. I am thinking about my employees and the people they go home to.”

Abbott, a Republican, cited personal freedom and the financial fallout as drivers of his decision, arguing that “businesses and families in Texas have the freedom to determine their own destiny.” And there were many who agreed with him, seeing the mandates as an unnecessary incursion that they were eager to be rid of.

“We have to get back to normal now,” said Amber Jowers, a bartender at Barflys who removed the sign requiring masks at exactly midnight.

But as the rules were lifted Wednesday, there was intense resistance across the state, with critics arguing that the governor’s decision was irresponsible while Texas remains in the grip of the pandemic.

Businesses can choose to require masks, and in many cities, they must still be worn inside municipal buildings. In Austin, officials said they would keep in place a local ordinance requiring masks and were bracing for a legal fight with Abbott and his administration.

Houston, Dallas and Austin were among the cities where school systems said students and staff members were still required to wear masks. But in Johnson City, west of Austin, the school board on Tuesday voted 4-3 to drop the mask mandate. Lubbock-Cooper Independent School District, which covers an upscale suburban area near Lubbock, sent an email to parents saying that masks were now optional. And in Lubbock, the matter is scheduled for debate Thursday.

“We’ve got a substantial number of teachers who want vaccinations that have not gotten them,” said Zachary Brady, the school board president in Lubbock, noting that the state had only recently made teachers eligible for coronavirus vaccines. “To me, the two conversations are just inextricably linked.”

As of Wednesday afternoon, there had been at least 2,706,294 virus cases and 45,760 related deaths in Texas during the pandemic, according to a New York Times database. Over the past week, there has been an average of 5,230 new cases per day, a decrease of 14% from two weeks earlier.

There were fears that Texas could backslide, particularly as new variants of the virus emerge.

But Abbott has urged residents to maintain their vigilance and has argued that Texas is well-positioned with access to vaccines and more testing. “COVID has not suddenly disappeared,” he said in announcing his decision. “But state mandates are no longer needed.”

Bert Rossel, 39, was among those who believed that the threat posed by the virus was overblown. “It’s survival of the fittest,” Rossel said. “My BMI is higher than normal. Obese people are more susceptible to corona, but it’s been over a year. I would have gotten it already.”

In Fort Worth, Charles Fuller, 22, went Tuesday night to Neon Moon Saloon, where a trash can out front invited patrons to toss their masks, which would be burned at midnight. On Wednesday night, he and his friends planned to go bar hopping to celebrate a friend’s 21st birthday.

“It feels good to get back to normal,” he said. “It’s probably not healthy, but whatever — I already had it.”

Under the relaxed rules, schools and other governmental facilities can continue to mandate masks, and businesses can set their own guidelines for covering faces and carrying out social distancing measures.

But Ken Paxton, the state’s attorney general, said he would pursue legal action against officials in Austin and surrounding Travis County over their insistence on using a local ordinance to keep a mask mandate in place.

“City/county leaders must not be thinking clearly,” Paxton said in a post on Twitter. “Maybe it’s oxygen deprivation from quintuple-masking. Whatever the case, they’ve tried this before. They lost.”

But officials in Austin countered that any effort to challenge them was a distraction from what should be the highest priority: confronting the virus. About 16% of Texans have received at least one dose of the vaccine, a rate that considerably trails the national average.

“If the state chooses to sue us, then it’s basically them going out of their way to undermine the health of Texas,” said Greg Casar, an Austin city councilman. “My hope is that they focus on vaccine distribution rather than messing with Austin and putting more lives at risk.”

Critics argued that business owners were put in a difficult position in having to devise their own standards and even more trouble in having to implement them. In Bexar County, which includes San Antonio, officials have asked business owners to enforce the rules and have law enforcement agencies ready to respond to calls for help removing customers.

“It is a very unfair thing to put the business in this position because they have to make the policy themselves,” said Nelson Wolff, the Bexar County judge and a Democrat. “It is a terrible burden; they are going to make people mad no matter what they do. The governor made a huge mistake doing this.”

Many workers said they expected that the relaxed statewide rules would make their jobs more difficult. “Definitely not looking forward to the conversations we are going to have with customers that refuse to wear a mask,” said Remington Bruce, the head of operations for MAD, a tapas restaurant in Houston.

At EZ’s Brick Oven &amp; Grill in San Antonio, the rules are strict: Customers and workers have to wear masks. A patron who refuses must order to go or sit outside. Plexiglas lines the counters, which are sanitized routinely. Their vigilance was informed by the death of one of their managers, Adam Colunga, 34.

“We’re doing all the hard work to prevent another Adam from happening,” said Sean Medina, 30, who is a general manager at the restaurant. “But Governor Abbott took away the power from us, giving it to the maskless instead.”