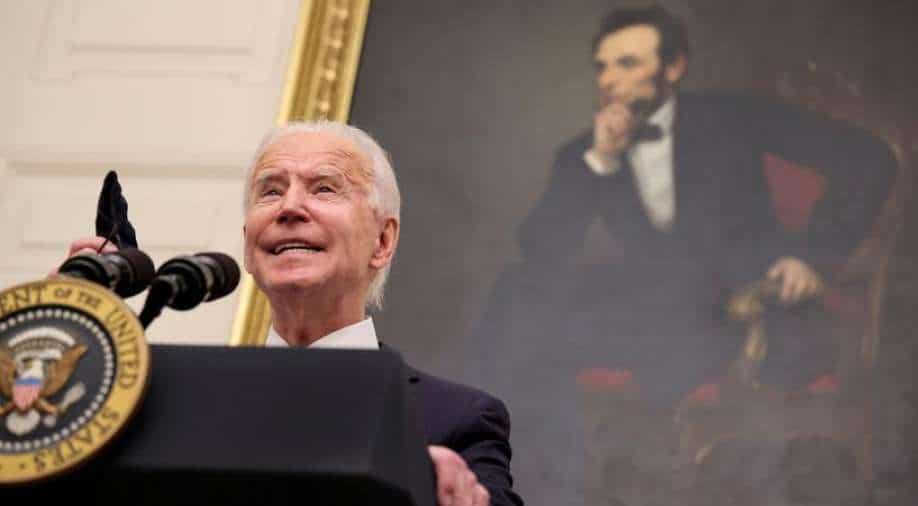 On Thursday, the world got its first glimpse of how Biden is likely to approach one of the greatest security concerns of American partners in the region: the network of militias that are backed by Iran and committed to subverting the interests of the United States and its allies.

BEIRUT — Since President Joe Biden entered the White House, Iranian-backed militants across the Middle East have struck an airport in Saudi Arabia with an exploding drone, and are accused of assassinating a critic in Lebanon and of targeting U.S. military personnel at an airport in northern Iraq, killing a Filipino contractor and wounding six others.

On Thursday, the world got its first glimpse of how Biden is likely to approach one of the greatest security concerns of American partners in the region: the network of militias that are backed by Iran and committed to subverting the interests of the United States and its allies.

U.S. officials said that overnight airstrikes ordered by Biden hit a collection of buildings on the Syrian side of a border crossing with Iraq on Thursday and targeted members of the Iran-backed militia Kataib Hezbollah and an affiliated group.

While the exact death toll remained unclear, Biden appears to have calibrated the strikes, hoping they would cause enough damage to show that the United States would not allow rocket attacks like that on the Irbil airport in northern Iraq on Feb. 15, but not so much as to risk setting off a wider conflagration.

“He is kind of putting his first red line,” said Maha Yahya, director of the Carnegie Middle East Center in Beirut.

She said the strikes signaled to Iran that his eagerness to return to a nuclear agreement would not lead Biden to ignore other regional activities by Iran and its allies, and particularly attacks on U.S. troops.

“It is sending a message: The bottom line is that we won’t tolerate this and will use military force when we feel you’ve crossed the line,” Yahya said.

Militiamen fled from six of the seven buildings hit in the strikes after spotting what they believed to be a U.S. surveillance aircraft, according to the Sabareen news channel on Telegram, which is used by Iran-backed groups.

In a sign of heightened tensions between the Iraqi government and Iran-backed groups that are also part of Iraq’s security forces, Sabareen said the U.S. strikes had been aided by an Iraqi intelligence official posing as a shepherd.

In an interview with a local television network Thursday, Iraq’s foreign minister, Fuad Hussein, said those calling themselves “the resistance” and launching rocket attacks in Iraq were no more than terrorists.

Sabareen called Hussein’s comments “a green light to the international community to target and eliminate the resistance under the pretext of terrorism.”

“We see these attacks as attacks on the Iraqi government,” Hussein said in a recent interview with The New York Times, referring to attacks on the U.S. Embassy and other American targets. Hussein is one of several Iraqi officials who have traveled to Iran in recent months to try to persuade it to use its influence to rein in militia forces.

“I and others went to Tehran and had a frank and open discussion with the Iranians,” he said. “For a period of time, it stopped these attacks.”

“At the end, the field of conflict is in Iraq,” Hussein said.

Senior Iraqi officials have said they expect a more nuanced policy by the Biden administration toward Iraq. Hussein said Baghdad had no expectations that the administration would make Iraq a foreign policy priority, but said relations would be helped by the long experience of both Biden and key administration officials with Iraq and Iraqi politicians.

Kataib Hezbollah says it maintains a presence at the border crossing to prevent the infiltration of Islamic State fighters into Iraq.

The Iraqi government has struggled to rein in Iran-backed militias that have grown in influence since mobilizing to fight the Islamic State when it took over large parts of Iraq and Syria in 2014. The group lost its last piece of territory two years ago, and many of the Iran-backed paramilitary groups have been absorbed into Iraq’s official security forces.

Iraq has warned that conflict between the United States and Iran playing out on its soil threatens to destabilize the country.

Attacks on U.S. interests in Iraq by suspected Iran-backed militias intensified after the United States killed an Iranian general, Qasem Soleimani, and a senior Iraqi security official, Abu Mahdi al-Muhandis, in a drone strike in Baghdad in 2020.

“In the last year, Iraq has become a playground and battleground for this type of activity driven by the U.S.-Iran escalation,” said Renad Mansour, the Iraq Initiative director at Chatham House, a London-based policy group. “These groups began to spring up after the killing.”

“There’s one clear message from all of them: that avenging the deaths isn’t over,” he said. “For them, time isn’t an issue.”

Mansour, who tracks armed groups in Iraq, said the newer groups appeared to be made up of fighters armed with weapons connected to the larger Iran-linked paramilitaries.

Some of the Iran-backed paramilitary groups are on the Iraqi government’s payroll as part of the Iraqi security forces but are only nominally under the control of the government.

The tit-for-tat attacks come as the Biden administration begins the daunting task of trying to restore the nuclear agreement with Iran that President Donald Trump withdrew the United States from in 2018. Looming behind the question of the parameters of a new deal is the issue of Iran’s destabilizing activities across the Middle East, which are particularly concerning to U.S. allies such as Israel and Saudi Arabia.

Iran has spent decades building a network of partnerships with militia groups across the region that has allowed it to project power far outside its area of influence. These groups include the Palestinian group Hamas in Gaza, Hezbollah in Lebanon, a number of groups in Iraq and the Houthi rebels in Yemen.

All of these groups have received at least some financing, support and weaponry from Iran over the years, and all share its ideology of “resistance,” or the struggle against Israel and U.S. interests in the region.

The groups have developed numerous, often low-cost ways of creating headaches for the United States and its allies. Hezbollah has grown into Lebanon’s most powerful military and political force, with an arsenal of more than 100,000 rockets pointed at Israel and seasoned fighters who helped turn the tide in Syria’s civil war in favor of President Bashar Assad.

This month, the group’s foes in Lebanon accused the group of assassinating Lokman Slim, a publisher, filmmaker and vocal critic of the group who had close ties with Western officials. Hezbollah officials denied any connection to Slim’s killing.

Days after Slim’s death, the Houthi rebels in Yemen, whom an Arab coalition led by Saudi Arabia has been bombing since 2015, targeted an airport in the Saudi city of Abha with an explosive-laden drone, damaging a civilian airliner.

The Irbil rocket attack was claimed by a previously unknown armed group calling itself the Guardians of the Blood. U.S. officials said it appeared to be affiliated with one or more of Iraq’s better-known militias, and Thursday’s strikes in Syria targeted facilities belonging to them.