Why Michigan is considered ‘fertile’ ground for anti-government extremists 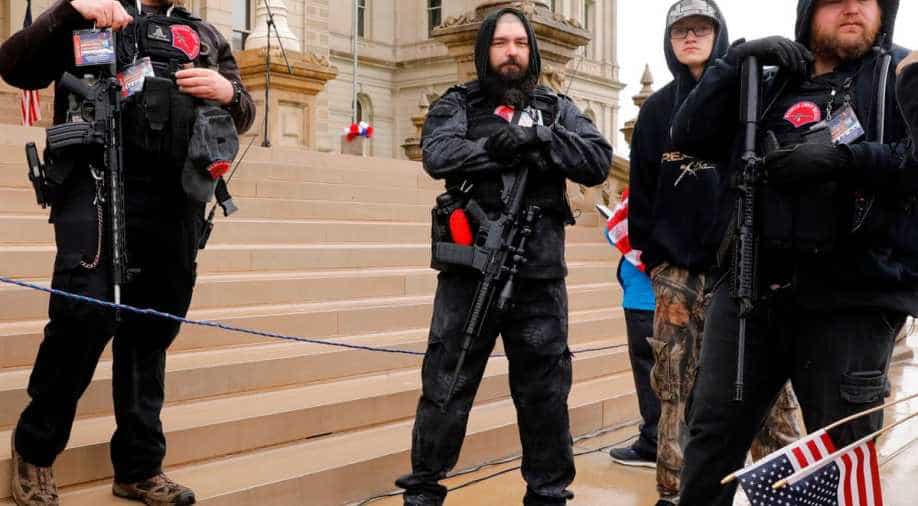 In the early 1990s, armed groups in Michigan, and around the country, were formed in reaction to bloody federal sieges against Randy Weaver and his family in Ruby Ridge, Idaho, in 1992 and against an armed cult in Waco, Texas, in 1993. The latter ended with the death of 76 people.

For the past decade, gun owners dressed in flak jackets and camouflage fatigues have brought their rifles into the Michigan Legislature at least twice every year, asserting their vehement support for gun rights by displaying weapons in the hallways.

This spring, those gatherings intensified as participants turned what had been a declaration about the Second Amendment into a protest over how far the government could go in limiting individual behavior amid the pandemic. Hundreds turned out to demand an end to lockdowns, social distancing and mask wearing.

Among the demonstrators who stormed into the Capitol to protest those measures were two brothers who have now been charged as part of an extremist plot to kidnap Gov. Gretchen Whitmer and to commit other violence. The brothers subscribed to a larger anti-government movement that has evolved in Michigan and throughout the United States over decades, but was spurred on this year by the pandemic, social justice protests and the presidential election.

With its fervent gun culture and its gaping differences between urban and rural populations, Michigan has seen its divisions grow ever wider since at least the 1990s, when armed groups on the right adopted increasingly extreme positions on limiting the government’s power.

The brothers are among 13 men who face a variety of charges related to the kidnapping plot, including terrorism, conspiracy and weapons possession. The authorities said the men were also affiliated with an extremist group called the Wolverine Watchmen, which court documents called “an anti-government, anti-law enforcement militia group.” Such groups have existed in Michigan for decades, most notably in 1994 with the formation of the Michigan Militia.

“There have been militia-type groups in Michigan even before we started using the phrase domestic terrorism,” said Bill Ballenger, a former Republican state senator who represented a rural area. “Before it never got to armed insurrection or an attempt to overthrow the government or assassinate people or anything like that.”

In a sense, experts said, the fight over measures like mask requirements to contain the spread of the virus was the latest example of what these groups see as government overreach. “It is really the perfect issue for far-right conspiracy theorists to rally around,” said Daniel Levitas, a lawyer and the author of “The Terrorist Next Door,” a history of extremist groups.

In the early 1990s, armed groups in Michigan, and around the country, were formed in reaction to bloody federal sieges against Randy Weaver and his family in Ruby Ridge, Idaho, in 1992 and against an armed cult in Waco, Texas, in 1993. The latter ended with the death of 76 people. The new far-right organizations accused the government of tyranny and began conducting paramilitary training and obtaining military equipment.

Timothy McVeigh and Terry Nichols, later convicted of bombing a federal office building in Oklahoma City in April 1995, killing 168 people, attended some of the earliest meetings of the Michigan Militia. The gory details from the trial diminished the appeal of such groups, but they continued to exist.

“It has been a particularly fertile place for them,” said Mark Pitcavage, a senior research fellow with the Anti-Defamation League’s Center on Extremism.

Various violent plots emerged in Michigan during the 1990s and 2000s, including the murder of a state police officer. In the 1990s, there was a plot to attack Camp Grayling in northern Michigan because Russian tanks captured during the gulf war and used there for training were seen as part of a scheme to store armaments for a Communist invasion of Michigan, Levitas said.

In 2010, the FBI arrested five members of a group called the Hutaree and charged them with sedition based on a plot to overthrow the government, but a federal judge threw out most of the charges based on lack of evidence.

Various factors contribute to the current strength of the anti-government movement in Michigan, including the collapse of the auto industry, which stripped the state of countless jobs, said Amy Cooter, a senior sociology lecturer at Vanderbilt University in Nashville, Tennessee, who has studied such groups for a decade.

“We’ve always had some groups who had the potential to take things very personally,” she said, and they saw Whitmer’s handling of the pandemic as an affront. “They didn’t think it was being handled appropriately,” she said.

The pandemic hit much harder in cities like Detroit compared with rural areas, and the governor drew criticism from some parts of the state by using executive orders to put into place one-size-fits-all measures that treated counties with very few cases the same way as urban centers. She often clashed with President Donald Trump, who during the protests tweeted, “Liberate Michigan!”

Accusations by the president that Democrats like Whitmer were trying to steal the election have fed a certain paranoia and anxiety about the government that is standard among many of these extremist groups, experts said.

“It’s feeding into their beliefs that Trump will not get a fair shake and they’re seeing the open tensions between Trump and Whitmer,” Cooter said.

The anti-government movements in Michigan share ideology with other far-right groups across the country.

One of the men accused this week, Joseph Morrison, is considered the leader of the Wolverine Watchmen and used the online name Boogaloo Bunyan.

Adherents of the boogaloo movement express strong anti-government sentiments. The name “boogaloo” is a pop culture reference derived from a 1984 movie flop that became a cult classic called “Breakin’ 2: Electric Boogaloo.” It went through various mutations online and emerged sometimes as the “Big Luau.”

That is why adherents sometimes wear Hawaiian shirts, including numerous armed protesters at the state Capitol in Lansing, in April. At least one of the men charged this week had posted a picture of himself in a Hawaiian shirt.

The six men directly accused of plotting to kidnap the governor seemed to adhere to a slightly different ideology, experts said, one that relied on a distorted interpretation of the Constitution. They contend it upholds individual liberty over all else, with people allowed to make citizen’s arrests against those who infringe on such rights. They labeled Whitmer a “tyrant,” and often couch their beliefs in the language of the American Revolution.

Both movements believe that only a new revolution or civil war will prevent the government from trying to control Americans, with the best government being almost none at all. Anti-immigrant, Islamophobic and anti-Semitic sentiments are widespread.

Given that many such groups support Trump, they have diminished their ire toward the federal government and focused on state governments instead, Pitcavage said.

Most lawmakers in the state strongly condemned the violent threat to Whitmer.

But others adopted the false line that it was all a left-wing plot. “Anarchists want to destroy the government,” said state Rep. Beau LaFave, a Republican, who blamed the governor for “turning up the heat on the partisan divide in the state.”

Mark Koernke, a broadcaster whose support of the Michigan Militia helped its spread in the early 1990s, wrote on Facebook, “Same FBI that let antifa burn down the country now attacking militia in Michigan to promote the Communist agenda.”

State Sen. Dayna Polehanki, a Democrat, took pictures on April 30 of the protesters with rifles in the state Legislature, including two of the men arrested in the plot against the governor. She said she saw no hope that the divided, Republican-dominated Legislature would act any time soon to ban armed protesters from the building.

“Maybe they were recruiting that day, or sending up a trial balloon for how it might go somewhere down the road,” she said. “To learn that the men in that photo are co-conspirators shakes me to my core.”