Why COVID caused such suffering in Italy's wealthiest region 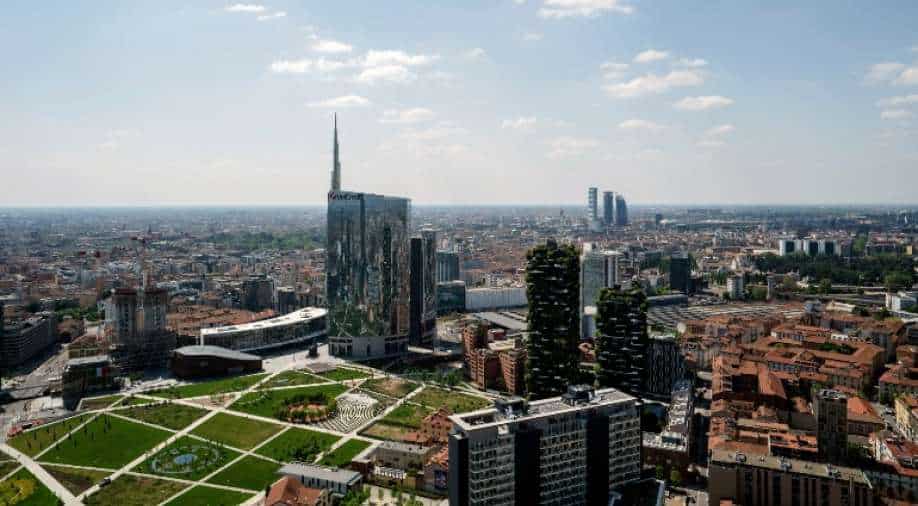 FILE -- An overview of the city of Milan, in the affluent Italian region of Lombardy, on April 22, 2020. Lombardy boasts sophisticated industry and world-class medical facilities, yet it was overwhelmed by the first wave of the pandemic. (Alessandro Grassani/The New York Times) Photograph:( The New York Times )

By mid-October, about half of Italy’s deaths had transpired in Lombardy. The number of the country’s deceased now stands at more than 47,000

LONDON — Dr. Chiara Lepora had never imagined being deployed in her home country of Italy. As a physician for the international relief agency Doctors Without Borders, she was accustomed to caring for people in countries like Yemen and South Sudan, amid extreme poverty and war.

But early this year, as the novel coronavirus spread from Asia to Europe, Lepora found herself pressed into service in the northern Italian region of Lombardy, one of the wealthiest places on earth.

Anchored by Milan, Italy’s financial and fashion capital, Lombardy boasts sophisticated industry and world-class medical facilities. Yet it was overwhelmed by the first wave of the global pandemic, forcing doctors to ration ventilators and hospital beds while having to decide who lived and who died.

The catastrophe in Italy’s most affluent region was in part a consequence of having entrusted much of the public health care system to private, profit-making companies while failing to coordinate their services. Over the previous quarter-century, substantial investment has flowed into lucrative specialties like cardiac surgery and oncology. Areas on the front lines of the pandemic, like family medicine and public health, have been neglected, leaving people excessively reliant on hospitals for care.

As Italy now contends with a brutal second wave, Lombardy is again near the breaking point, with three-fourths of its hospital beds occupied by COVID-19 patients — nearly double the level considered dangerous by the national Health Ministry.

“If you consider profit to be the endgame of health care instead of health, some people are going to be left out,” Lepora said. “The pandemic exposes all of those weaknesses.”

Unlike the United States, where more than 30 million people lack health insurance, Europe remains a land of universally accessible, government-furnished medical care — Italy included. Yet in Lombardy, the hardest-hit region, the pandemic has revealed the pitfalls of a poorly executed push to open the system to private providers.

“Specializations such as hygiene and prevention, primary health care, outpatient clinics, infectious diseases and epidemiology have been considered not strategic assets, not sexy enough,” said Michele Usuelli, a neonatologist in Milan who holds a seat on the regional assembly, representing the center-left Più Europa party.

“That is why we have a health system very well prepared to treat the most complicated diseases but completely unprepared to fight something like a pandemic,” Usuelli added.

The same could be said about many wealthy countries, including the United States and Britain, where state-of-the-art medical care has provided no immunity against the pandemic. Only a handful of places — among them Taiwan, South Korea and New Zealand — stand out for their effective responses to the pandemic.

But Lombardy claims distinction as an outlier among the worst-hit places on earth. Italy has suffered more than 760 deaths per million people, according to the World Health Organization, more than the United States and nearly as many as Britain. By mid-October, about half of Italy’s deaths had transpired in Lombardy. The number of the country’s deceased now stands at more than 47,000.

The roots of Lombardy’s alteration go back to 1995, when a flamboyant politician named Roberto Formigoni became the regional governor. He championed legislation that allowed private providers to serve patients while collecting payment from the taxpayer-financed regional health care system.

Many embraced the change as an innovation that brought competition, forcing public hospitals and clinics to improve. But privatization was laced with corruption.

Formigoni would serve more than five years in prison for a scheme in which he accepted jaunts on yachts, holidays at lavish Caribbean resorts and sundry gifts from a lobbyist for private medical providers in exchange for steering the region’s business his way.

The scandal was less an outlier than an indicator of the forces driving privatization, a reality that continued even after Formigoni left office in 2013, experts say.

Many argue that the problems plaguing the regional health care system are an indictment not of privatization but of the failure of local government leaders to ensure that private companies delivered needed services.

“The problem is in the governance of hospitals and clinics,” said Francesco Paolucci, professor of health economics and policy at the University of Bologna.

Regional officials could have conditioned their willingness to pay for treatments at cutting-edge cancer centers on promises that private providers would furnish less lucrative services like geriatric care. But that mindset was trumped by the profits to be made.

“They gave permission to the private sector to more or less open whatever they wanted,” Usuelli said. “It was a complete missed opportunity to hold private companies accountable to their social responsibility.”

The focus on profitable specialties created incentives for doctors to seek jobs in those areas while forsaking general medicine.

In 2016, Lombardy — home to more than 10 million people — saw only 90 medical school graduates go on to pursue specialized studies toward becoming general practitioners. They received annual scholarships of 11,000 euros (nearly $13,000), less than half those secured by people preparing for specialties like cardiology. The numbers have grown in recent years, but not enough to replace retiring general practitioners, medical associations say.

With the best medical minds focused on advanced treatments, Lombardy’s capacity to provide basic medical care and safeguard public health gradually deteriorated. Over the past decade, total health care spending in Lombardy increased 11%, while support for primary care was cut 3%, according to official data analyzed by Usuelli.

Lombardy appears to have compounded its problems with a 2015 law that centralized services for chronic diseases like hypertension in hospitals, further diminishing the role of general practitioners in helping keep their patients healthy.

“This was about rationalizing the costs and avoiding waste,” said Marco Cambielli, a gastroenterologist who heads an association of doctors and dentists in the city of Varese. “But it caused the loss of the relationship between patients and their general practitioners.”

In the neighboring region of Veneto, a health care system centered on so-called community care — in which family doctors and nurses made home visits with an eye toward prevention — performed far better. There, primary care physicians and an effective contact-tracing effort prevented a surge of people from reaching hospitals.

“Family doctors are a cost,” said Filippo Anelli, president of the national federation of doctors and dentists. “If the mentality is that you need to make money from health care, the investment in community medicine looks clearly less remunerative.”

When the first wave hit, Milan — a city of more than 1.3 million — had only five doctors expert in public health and hygiene, said Roberto Carlo Rossi, president of Milan’s Doctors’ and Dentists’ Guild. They were responsible for setting up a testing and contact-tracing regimen.

The region has since hired more. Yet as recently as last month, Lombardy’s health department notified doctors that the agency “can no longer conduct prompt epidemiological investigation.” That notice was as untimely as it was disturbing; Italy’s daily COVID deaths have nearly tripled over the past two weeks, with Lombardy again leading the trend.

Lepora, the Doctors Without Borders physician, was en route to her base in Dubai, United Arab Emirates, in February, returning from a trip to the United States, when she stopped to visit her family in the northern Italian region of Piedmont. The pandemic shut down the airports, leaving her marooned.

Two dozen other Italians working with Doctors Without Borders were similarly stuck. They set up a support unit at a public hospital in the city of Lodi.

The doctors were experienced in disaster zones and astonished to see that Italy had become one. Their Italian colleagues were venturing into intensive care units full of COVID patients without adequate protective gear.

Lepora tried to institute a rationing system by limiting the number of people entering the hospital. But she said that plan collided with the operations of private companies that provided meals and cleaning services. They refused to limit their visits, concerned that they could be accused of breaching their contracts.

By the time she returned to the Middle East in June, Lepora had diagnosed a worrying problem.

“The service rather than the patient had been put at the center of attention,” she said.

In Milan, Erika Conforti, 35, opened her own practice as a family doctor in February, just in time for the pandemic. She had taken over a practice from a retired doctor, working out of a private office in an apartment building.

Under the rules governing Lombardy’s health care system, general practitioners were supposed to be responsible for no more than 1,500 patients, but Conforti initially inherited 1,800, including 500 elderly people.

She had been drawn to general practice out of a desire to help people with everyday ailments.

“I love to speak with patients,” she said.

As the pandemic spread, she found herself working 12 hours a day and still failing to keep up with the barrage of calls and emails. She struggled to visit patients stricken by the coronavirus. The regional system lacked protective gear like masks and gloves, so she bought her own.

As the second wave gathers force, Conforti frets that the same afflictions are at work. The region has added hospital beds but lacks nurses and anesthesiologists.

“If there’s not enough people who know how to work in the hospital setting, then increasing the number of beds is pointless,” she said.

At her own practice, 30 of her patients tested positive for COVID-19 on a recent day, while over 50 more were quarantined, awaiting tests that took five and six days to yield results.

“I’d like to be able to contact positive COVID patients at least once a day, but I just don’t have the time,” Conforti said. “I’m worried that every minor distraction that I have has very serious consequences. I’m scared as I’m working.”