Who won the debate? Political observers weigh in 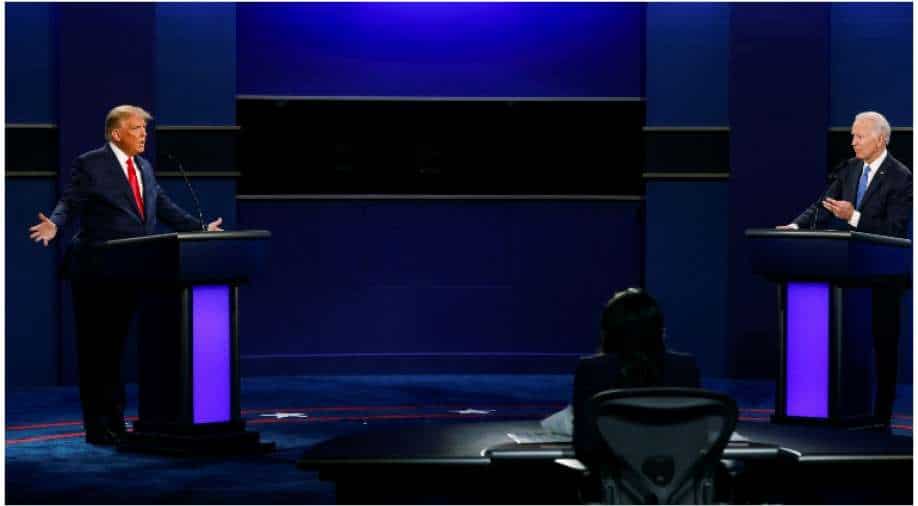 Where some saw hope for Trump, others saw the same candidate facing the same challenging campaign dynamics

Like other presidents who have slipped in the polls after a widely panned first debate, President Donald Trump was the beneficiary of low expectations on Thursday night in the final debate before the election, a more civil and lower-decibel affair than the last.

But his effort to demonstrate greater discipline was most likely too little, too late to deliver the jolt to the race that he needs to lift his chances for reelection, some of the nation’s top political strategists and other observers said.

Where some saw hope for Trump, others saw the same candidate facing the same challenging campaign dynamics.

“Nothing changed,” Matthew Dowd, a former top aide to President George W. Bush, said on ABC News. “He wasn’t a bull in a china shop. That doesn’t mean he won the debate.”

Although Trump needed some kind of breakthrough to overcome former Vice President Joe Biden’s lead in the polls, Dowd said later that he did not see that happen during the course of the 90-minute encounter. “Biden had a lead going in and has a lead leaving,” he wrote on Twitter.

The size of Biden’s lead, double digits in some national polls, is so large that any good Trump did to his campaign was probably limited by Biden’s even performance. “Biden did not do a face plant,” said Charlie Cook, the editor of the nonpartisan Cook Political Report. “That is all he needed to do.”

Ahead of the debate, many analysts saw parallels between Trump’s underdog position and the high stakes President Barack Obama faced before his second debate in 2012, when he delivered sharper and more forceful rebuttals to Mitt Romney than he had before and soon rebounded in the polls.

Certainly, many of Trump’s defenders sought to portray his performance that way Thursday. Many claimed that he had triumphed over Biden, seizing on the former vice president’s statement about phasing out fossil fuel use as a devastating misstep.

And others claimed that Biden had reinforced stereotypes of him as a career politician who inspires little passion.

David Brody, the chief political analyst for the Christian Broadcasting Network, said on Twitter that the president had "effectively hammered home a very simple theme tonight and that is this: ‘what have you done Joe during all your time in DC? You’re all talk no action.’”

Brody concluded, “That message will have traction.”

But it was not certain that the evening would have much effect on a race in which few undecided voters remain. Nor was it clear that the debate did anything other than reaffirm what most people already felt about both men.

Here is what observers from across the political spectrum said.

Trump’s supporters believed they had the moment that every campaign dreams of in a debate: those 20 or so seconds when your opponent makes a gaffe that can be spliced into an attack ad that can run repeatedly over the final stretch of the race.

It was not clear, however, that this is what Trump had after Biden challenged the president to produce video proving that he had said he would ban fracking and then expressed support for phasing out fossil fuels and ending federal subsidies for oil companies.

“I’m not sure much is going to change or can at this point in the race, in this year, but if anything were to, that oil line is the one that will haunt him,” said Mary Katharine Ham, a conservative analyst.

Republicans quickly began circulating one such video showing Biden describing what he would do about fracking, saying, “We would make sure it’s eliminated.” The former vice president has since said repeatedly he does not support ending the practice, a major source of jobs.

Republican strategists also saw something to like in Trump’s response on how he plans to handle the growing number of coronavirus cases across the country, revealing the deep divide between many conservative supporters of the president, who want a generally more hands-off approach from the government, and most other Americans, who believe in taking steps such as mandating mask-wearing in public.

Ari Fleischer, a former aide to Bush, said many Americans would find something more hopeful in the president’s message, versus what he saw as the pessimism of Biden’s words. “Trump is right about learning to live with the virus,” Fleischer said. “We can and must fight the virus, and live our lives. I suspect Trump’s message about living with it beats Biden’s message about dying with it.”

Brad Todd, a Republican strategist, echoed that point, saying that many Americans are wary of stringent lockdowns. “Biden talks bailouts and shutdowns — Trump talks reopening. That’s a good contrast for the president and he should hold this fight here,” Todd said.

But Tony Fratto, who also worked for the Bush administration, raised what some strategists have said is Trump’s Achilles’ heel: his drop in support among seniors. “Continuing to press the fact that young people are less likely to die will not help to close that gap with old people,” Fratto said.

Biden’s defenders appeared to anticipate that Trump would be graded on a curve. But they tried to remind people that any perceptions of a vast improvement were relative.

“I’ve watched more Trump debates than any human,” Ron Klain, an aide to Biden who helped him prepare for the debates, said less than an hour into the event Thursday. “The ‘new’ Trump never lasts more than 40 minutes.”

One of the biggest unknowns going into the debate was how Trump might try to unnerve Biden by raising unsubstantiated claims about the business pursuits of his son Hunter in China and elsewhere.

But when Trump raised the issue, he found himself on the defensive when Biden turned the question back around, asking about Trump’s taxes and noting a recent New York Times report that brought to light a previously undisclosed Chinese bank account belonging to the president. Even some conservatives conceded that Biden had played his hand well when Trump had to spend time explaining why he had not released his tax returns.

“Biden had a shrewd strategy on Hunter allegations to get it on Trump’s taxes and bank account, and it worked,” said Rich Lowry, the editor of National Review.

Ezra Klein, the editor at large of Vox, said that Trump appeared thrown off by Biden’s response. “It is amazing how easy it is to distract Trump from the one attack he clearly prepared for tonight by needling him on his tax returns and finances,” he said. “It’d be funny except for that same total absence of focus defines his presidency.”