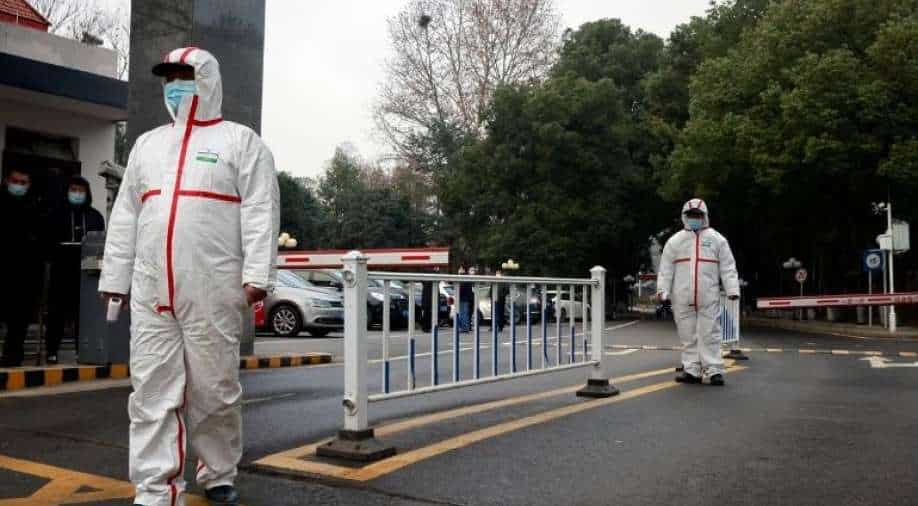 Security personnel in personal protective equipment (PPE) look on during the visit by members of the World Health Organization (WHO) team tasked with investigating the origins of the coronavirus disease at the Hubei provincial center for disease Photograph:( Reuters )

The WHO mission comes with heavy political baggage, China refused the team access until mid-January and there are question marks over what the experts can hope to find, one year on

The World Health Organization said on Monday that team visiting China to explore the origins of the coronavirus is having productive talks with its Chinese counterparts.

The expert team in Wuhan has now started investigations on the ground, notably visiting the Huanan seafood market where one of the first reported clusters of infections emerged, and the hospital where early patients were treated.

The WHO, which has sought to manage expectations for the mission, has said its members would be limited to visits organised by their Chinese hosts and have no contact with community members, because of health curbs.

Maria Van Kerkhove, the WHO's technical lead on Covid-19, said the team would be visiting the Wuhan Institute of Virology.

Former US President Donald Trump pushed an unsubstantiated theory that the virus escaped from the facility.

"They had a very good visit to the market, seeing first-hand the stalls and walking through."

Van Kerkhove said they had also met with counterparts from the Chinese Center for Disease Control and Prevention.

"They will visit the Institute of Virology. That is being planned," she added.

WHO blasted critics of its investigation into the origins of the Covid-19 pandemic and challenged those claiming to know better to come forward with the smoking gun.

The UN agency's emergencies director Michael Ryan hit out at those sniping at the mission, and said people claiming they have information on how the pandemic broke out should emerge from the shadows.

Ryan said many critics were saying they "won't accept the report when it comes out", or that there is "other intelligence available that may show different findings" on how the virus broke out.

"If you have the answers... please let us know," Ryan told a press conference from the WHO's headquarters in Geneva.

He asked how responsible it was "to say you won't accept a report before it's even written? To say that you have intelligence that has not been provided?"

The WHO mission comes with heavy political baggage, China refused the team access until mid-January and there are question marks over what the experts can hope to find, one year on.