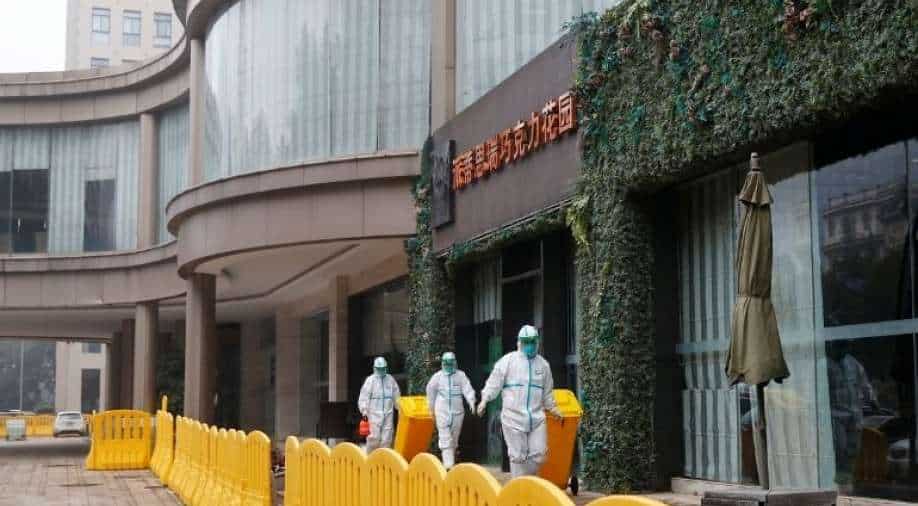 People in protective suits walk with bins outside the hotel where members of the World Health Organisation (WHO) team tasked with investigating the origins of the coronavirus (COVID-19) pandemic are quarantined, in Wuhan, Hubei province, China Photograph:( Reuters )

Beijing has so far frustrated international efforts to track the origins of the virus, which has killed more than 2.1 million people globally and only recently allowed the WHO team into China after repeated delays

A World Health Organization-led team investigating the origins of the deadly COVID-19 pandemic has left its quarantine hotel on Thursday to begin fieldwork.

The mission has been plagued by delay, concerns over access and bickering between China and the United States, which has accused Beijing of hiding the extent of the initial outbreak and has criticised the terms of the visit, under which Chinese experts conducted the first phase of research.

Meanwhile, the United States demanded a "robust and clear" international probe into the origins of the coronavirus pandemic.

Beijing has so far frustrated international efforts to track the origins of the virus, which has killed more than 2.1 million people globally and only recently allowed the WHO team into China after repeated delays.

"It's imperative that we get to the bottom of the early days of the pandemic in China, and we've been supportive of an international investigation that we feel should be robust and clear," White House spokeswoman Jen Psaki said Wednesday.

President Joe Biden's predecessor Donald Trump had enraged China by accusing it of a botched response to the initial outbreak in Wuhan, and had led calls for an independent investigation.

China has sought to deflect blame for the massive global human and economic toll by suggesting -- without proof -- that the virus emerged somewhere else.

The highly anticipated WHO mission was expected to begin its work under tight security on Thursday as team members finished their 14-day quarantine after arriving in China.

WHO team member Peter Daszak tweeted "Slightly sad to say goodbye to my 'gym' & my 'office' where I’ve been holed up for last 2 wks!!''

Day 14 of our quarantine in Wuhan!! Slightly sad to say goodbye to my “gym” & my “office” where I’ve been holed up for last 2 wks!! (Clue - It’s all in the same room...). Moving into next phase of work now w/ @WHO mission team & China counterparts. pic.twitter.com/SC75H70WMK

Journalists outside the team's quarantine hotel were kept away from the entrance by yellow barriers.

The team, which worked by videoconference while in quarantine, is led by Peter Ben Embarek, the WHO's top expert on animal diseases that cross to other species, and is expected to remain in China for two more weeks.

The WHO has tried to manage expectations for the investigation.

"There are no guarantees of answers," WHO emergency chief Mike Ryan told reporters earlier this month. "It is a difficult task to fully establish the origins and sometimes it can take two or three or four attempts to be able to do that in different settings."

The origins of COVID-19 have been highly politicised.

The investigating team had been set to arrive in Wuhan earlier in January, and China's delay of their visit drew rare public criticism from the head of the WHO, which former US President Donald Trump accused of being "China-centric" early in the outbreak.

China has been pushing a narrative that the virus existed abroad before it was discovered in Wuhan, with state media citing the presence of the virus on imported frozen food packaging and scientific papers claiming it had been circulating in Europe in 2019.

China's foreign ministry has also hinted on several occasions that the sudden closure of the U.S. army laboratory at Fort Detrick in July 2019 is linked to the COVID-19 pandemic outbreak.

A man surnamed Lei who was gathering discarded shared bicycles into a truck outside of the quarantine hotel said it was not a certainty that the virus had originated in China.

"People are saying that the virus came from other countries," he said. "I'm really not sure.”

Syrian air force may have dropped chlorine bomb on town in rebel area in 2018, says watchdog 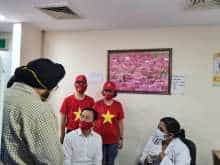