White House was warned about Flynn in January: Yates 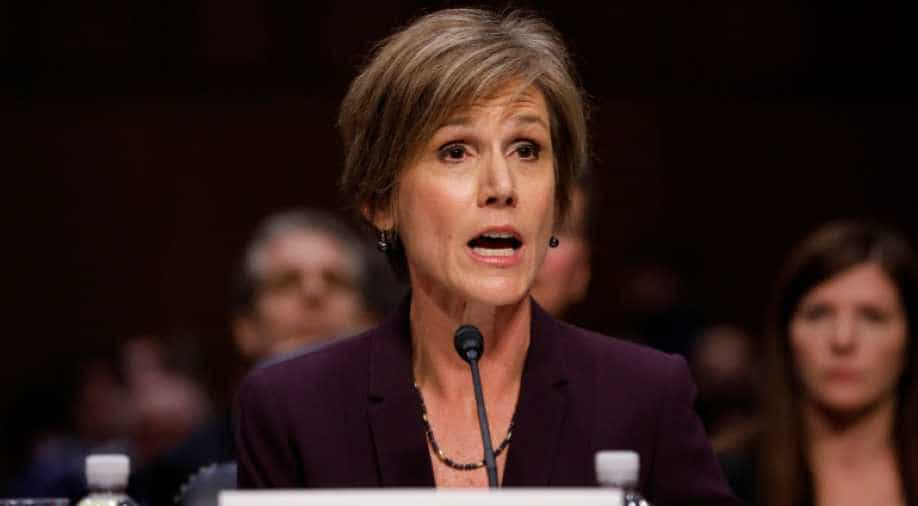 Former acting attorney general Sally Yates said she had told the White House, six days into Trump's administration, that Flynn had not been honest with vice president Mike Pence about his discussions with the Russian ambassador to Washington. Photograph:( Reuters )

The White House was warned in January that Donald Trump's national security advisor Michael Flynn was vulnerable to Russian blackmail, a top former official told lawmakers Monday, as the issue of the president's ties to Moscow returned to the spotlight.

Trump hit back by dismissing suggestions that his team colluded with Russia as a "hoax," and calling the congressional investigations into Russia's interference in the US election a taxpayer-funded "charade."

Yates confirmed reports that she had told the White House, six days into Trump's administration, that Flynn, a former military intelligence chief, had not been honest with Vice President Mike Pence about his discussions with the Russian ambassador to Washington, leaving him vulnerable to leverage from Moscow.

It nevertheless took 18 days before the president, pressed by Pence and others, dismissed the retired army lieutenant general, who had advised him on security issues throughout the 2016 presidential campaign.

"We believed that General Flynn was compromised with respect to the Russians," Yates told the hearing in her first public comments on the scandal which has dogged the opening months of Trump's presidency.

"This was a problem because not only did we believe that the Russians knew this but that they likely had proof of this information. And that created a compromise situation, a situation where the national security advisor essentially could be blackmailed by the Russians."

Yates, who was fired on January 30 after defying Trump over his contested travel ban, did not say what Flynn discussed with ambassador Sergey Kislyak in a number of December 2016 phone calls, which were secretly monitored by US intelligence.

Pence said in January that Flynn denied those calls involved sanctions placed on Russia by the Obama administration in response to its election meddling.

Obama warned Trump
Trump has repeatedly branded the issue of Russian interference "fake news" despite the US intelligence community's conclusion that President Vladimir Putin himself was behind the meddling.

In a series of tweets Monday evening, Trump doubled down on that stance.

"The Russia-Trump collusion story is a total hoax, when will this taxpayer funded charade end?" fumed one post, while in a second the president targeted Yates -- claiming she had "said nothing but old news!" after earlier assailing her for allegedly leaking classified information.

Known as a tough and independent prosecutor, Yates has been a target of Trump's ire since her refusal in January to support his controversial immigration ban on nationals from several Muslim-majority nations -- for which he fired her.

Obama had cautioned against Flynn, whom he fired in 2014 as head of the defense intelligence agency, due to his poor record in administration and personnel management.

In separate testimony Monday, Clapper called Russia's interference in last year's election "a clarion call for vigilance and action against a threat to the very foundations of our democratic political system."

"I believe they're now emboldened to continue such activities in the future, both here and around the world, and to do so even more intensely," he said.

The dual testimony by Yates and Clapper returned the spotlight to the simmering controversy over Russia's meddling in last year's US election.

Probes by several congressional committees into Russian election meddling have been bogged down for weeks amid accusations by Democrats that Republicans have stalled progress to protect the White House.