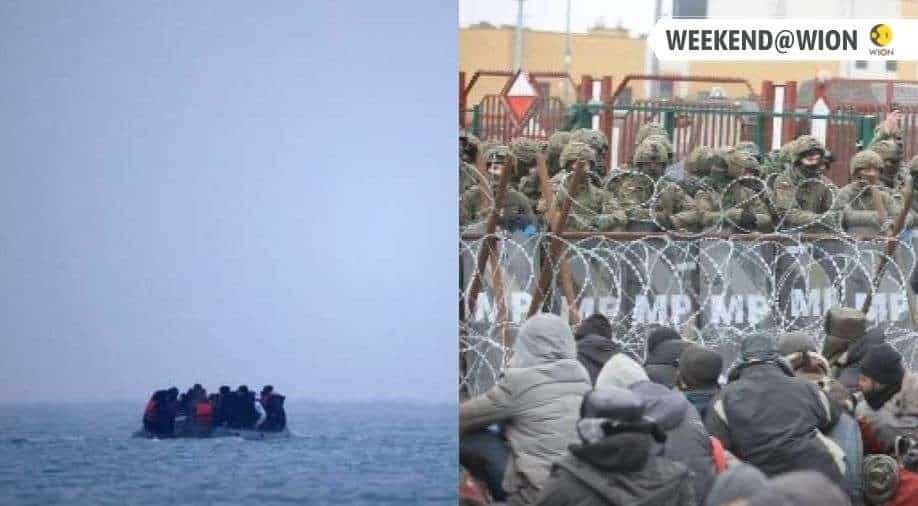 Be it water or land, migrants make all attempts to reach wealthy nations in search of a better life (representative image). Photograph:( Others )

Migrant crisis has been worsening in different parts of the world. Be it the US-Mexico border, English Channel or Mediterranean Sea, many migrants belonging to different countries travel dangerously to reach their destination every year. Several people drown while others get caught. The rest live in fear of getting caught and deported or are forced to take up petty jobs or end up getting exploited. Will migrant issue be ever solved?

Migrant crisis has been worsening in different parts of the world. Be it the US-Mexico border, English Channel or Mediterranean Sea, many migrants belonging to different countries travel dangerously to reach their destination every year.

Several people have drowned in the Mediterranean Sea, English Channel and other waterways after their boat capsized while many have been sent back after reaching the border.

Many countries like Greece have also build walls to stop the movement of the migrants. The United States have also built several camps to keep a check on migrant crisis.

In the Americas, people from various poor countries like El Savador, Colombia, Mexico, etc travel on foot, buses, etc to reach US border while in Africa, many of the migrants, who have been fighting hunger, common coups, violent conflicts and others, make attempts to reach the Mediterranean Sea through various land routes and then hitch a ride on a boat to reach Europe.

Many people also try to reach Australia or Canada from various regions.

But not everybody is lucky. Some people drown while others are caught. The people, who somehow reach these countries, live in fear of getting caught and deported someday. Many are forced to take up petty jobs or end up getting exploited.

At the end, very few of these people get to live their dream or even get a fair outcome of the trouble undertaken to travel long distances in inhumane conditions.

The million-dollar question is what drives them to do this and why the so-called wealthy nations not doing anything to solve this crisis.

The answer to the first question is simple, in several nations in the South America and Africa, there is poverty, violence, hunger and less opportunities to live a life with dignity.

The wealthy nations are just the opposite. They have everything one can dream of. But just lack the will to help.

Instead of making the world a better place to live, several countries have been making concerted efforts to ensure there is turmoil in different parts of many continents so that they are pursuing their agenda or fulfill their vested interests.

In 2015, Europe was moved after immense criticism over the migrant issue after a dead body of a three-year-old Syrian child washed ashore. The images of the dead body of Alan Kurdi on the beach forced Europe to open its doors for the refugees of the Syrian war.

Are the wealthy nations or the world as a whole waiting for more such bodies or will take action before it’s too late. Only time can solve this riddle.