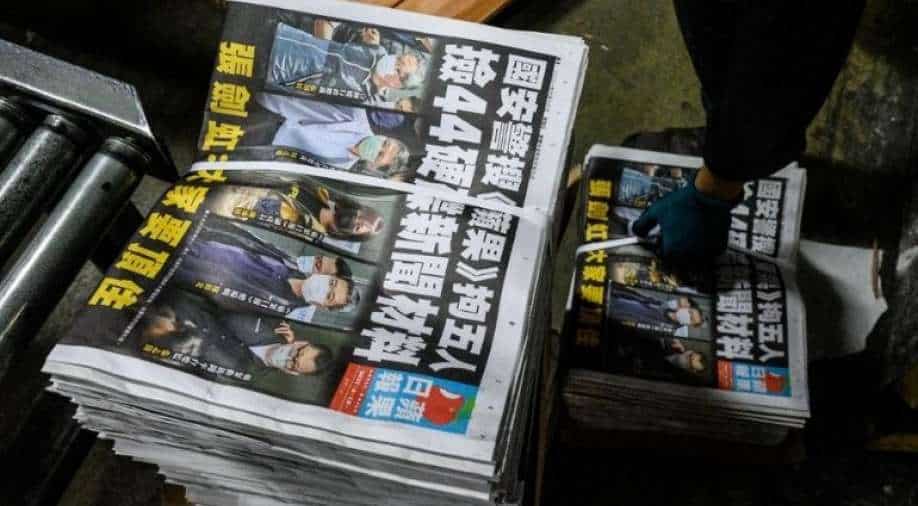 An employee stacks freshly printed papers onto a pallet in the printing facility of the Apple Daily newspaper offices in Hong Kong early on June 18, 2021. Photograph:( AFP )

A day after the Hong Kong government crackdown on its offices, the pro-democracy Apple Daily newspaper hit the stands on Friday.

The authorities had arrested five executives, however, the popular tabloid made it to the stands with an extra-large print run and a characteristic message of defiance emblazoned on its front that read: "We must press on".

This bold stance and the words of defiance were inspired by the words of CEO Cheung Kim-hung as he was dragged from the offices of Apple Daily on Thursday.

United Kingdom foreign secretary Dominic Raab on Thursday accused China of using the security legislation to "target dissenting voices" in Hong Kong. The law has dropped an authoritarian chill over most aspects of life in Hong Kong, including education and arts.

More than 500 police officers raided the paper's newsroom on Thursday in an operation that authorities said was sparked by articles that allegedly appealed for sanctions against China.

While both Law and Cheung have now been charged, the others still await their fate. Most of those charged under this law are denied bail and spend months behind bars before going to trial.

However, the staff returned to the newsroom even as computers and hard drives were carted away by police as evidence.

Instead of the usual 80,000 copies, the daily opted to print run 500,000 copies, hoping that Hong Kongers might support them by snapping up the historic copy as newsstand owners reporting much higher numbers of sales as compared to other days.

However, the future of Apple daily is now unclear. The daily's wealthy owner Lai, 73, is currently serving multiple sentences.

Before the latest freeze, Apple Daily had said it had enough cash to keep going for the rest of the year.