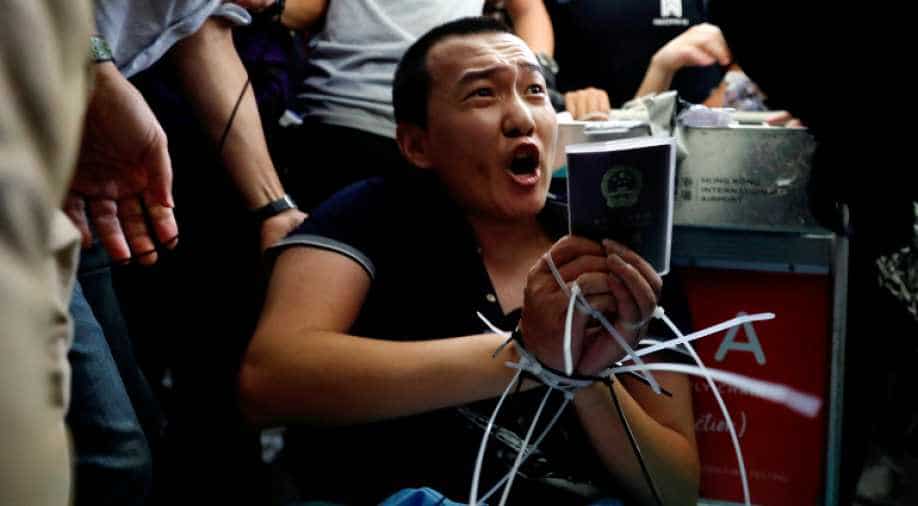 In one particularly ugly scene filmed by media, a group of protesters ganged up on a policeman and beat him. They stopped their attack when the policeman pulled his gun and pointed it at them, but did not fire

Airport operations resumed on Wednesday in Hong Kong after two days of protest in the Chinese controlled city.

Hundreds of flights that had been disrupted over the past two days were started again.

The unrest, which has seen millions of people take to Hong Kong's streets, was sparked by opposition to a planned law that would have allowed extraditions to mainland China.

But it quickly evolved into a much broader campaign for democratic freedoms, and to stop the growing influence of China's authoritarian rulers in the semi-autonomous city.

On Monday and Tuesday, thousands of protesters wearing their signature black T-shirts gathered at Hong Kong's airport, forcing hundreds of flights to be cancelled.

After initially just voicing their demands with peaceful demonstrations, the protesters adopted more aggressive tactics on Tuesday and created barricades with luggage trolleys to block passengers at the departure halls.

Late on Tuesday night, the protests descended into a series of violent confrontations with police, and demonstrators scuffling with passengers desperate to get on flights.

In one particularly ugly scene filmed by media, a group of protesters ganged up on a policeman and beat him. They stopped their attack when the policeman pulled his gun and pointed it at them, but did not fire.

Demonstrators also turned on two men, fuelled by suspicions within their ranks about undercover police or spies.

The first man was held for about two hours before eventually being led away in an ambulance. Riot police briefly deployed pepper spray and batons to beat back protesters while they escorted the vehicle away from the departures hall.

Another man, wearing a yellow journalist vest, was surrounded, zip-tied and then beaten by a small group who accused him of being a spy.

In a tweet, Hu Xijun, the editor of China's state-controlled Global Times tabloid -- which has vociferously condemned the protests -- said the man was a journalist working for the paper.

By early Wednesday, most protesters had left and many flights were operating as scheduled in the morning.

However, it was unclear if the protesters, who have no public leaders and organise via social media, would return to the airport.

The Airport Authority has obtained an injunction to remove demonstrators but enforcing it may prove difficult, as the hub is designed to make entry as fast and efficient as possible.

Passengers can also arrive via bus, train and taxi, with each mode of transport having different entrances.