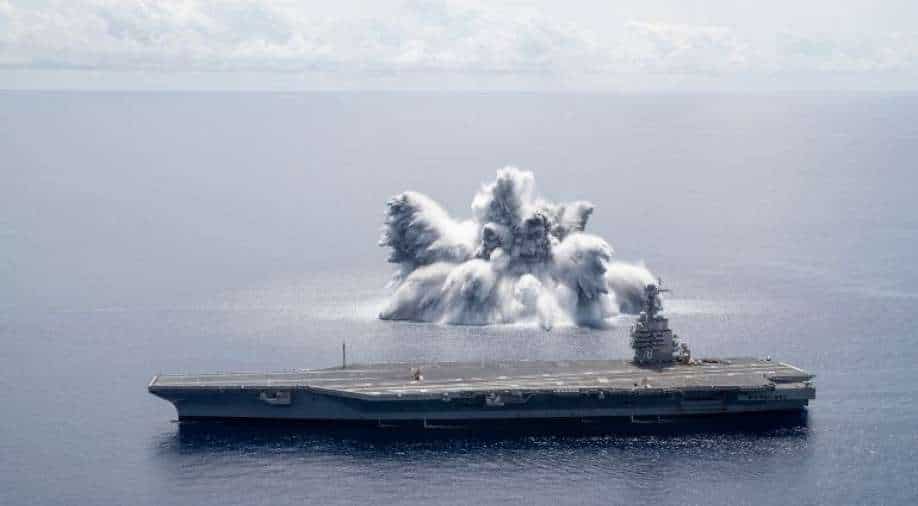 The US Geological Survey said the explosion, which occurred in the Atlantic Ocean off the Florida coast, registered as a 3.9 magnitude earthquake. (Picture courtesy: US Navy) Photograph:(Others)
Follow Us

The United States Geological Survey reported a 3.9 magnitude earthquake around 161 kilometres off the coast of Florida.

The US Navy has uploaded a video of the USS Gerald R Ford, one of the world's largest and newest aircraft carriers, undergoing a "full ship shock trial."

The shock trial comprised the detonation of just under 20 tonnes of explosives within metres of a ship cruising off the east coast of the United States.

The United States Geological Survey reported a 3.9 magnitude earthquake around 161 kilometres off the coast of Florida. Some media reports said the quake was linked to the ship's shock trial.

Images and video footage showed an enormous burst of water shoot from the ocean as a result of what US media called a 40,000-pound (18,144-kg) explosion.

In a statement, the Navy said that it "conducts shock trials of new ship designs using live explosives to confirm that our warships can continue to achieve challenging mission requirements under adverse conditions they may encounter in battle."

"The first-in-class aircraft carrier was designed using advanced computer modelling methods, testing, and analysis to ensure the ship is hardened to withstand battle conditions, and these shock trials provide data used in validating the shock hardness of the ship," the Navy added.