Watch: UK Fuel crisis, as people wait in queues, man rides horse into gas station, mocks those waiting to fill up on fuel 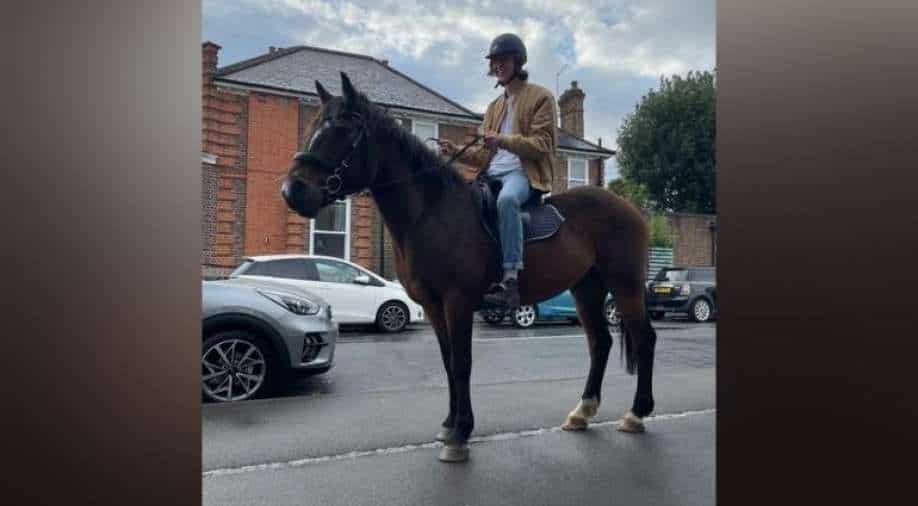 Trotting his horse, alongside those cars, Gus can be heard singing 'Queuing for Petrol, I’m on a horse. I don't need petrol coz he runs on carrots'

As the United Kingdom battles a fuel shortage and people are stuck in long queues at the gas stations, a British man that goes by the username Gusdolphin on Tik Tok has found a rather unique solution to the country's furl shortage woes.

In a video that is going viral on video-sharing app Tik Tok, a man by the name of Gus Lee-Dolphin took it upon himself to make light of the situation that has worried everyone.

The video that is shot from the point of view of Gus, shows long queues outside a gas station. Trotting his horse, alongside those cars, Gus can be heard singing "Queuing for Petrol, I’m on a horse. I don't need petrol coz he runs on carrots".

This video has garnered more than five million views on TikTok and people are lapping up the trolling. On Instagram, people can be seen suggesting other forms of transportation that Gus can use in his next videos. One Instagram user has even suggested Roller skates.

It turns out that this isn't Gus's first time trolling the motorists waiting in lines for fuel. In an earlier video posted by Gus, he is riding a bicycle through a petrol station. Similar to his horse and petrol song, he can be heard singing, "Queuing for petrol, queuing for petrol, we don't need petrol coz I'm on a bike".

Queues continued to build at refuelling stations, especially in London and southern England.

Many British gas stations were still dry on Friday, after a chaotic week that saw panic buying, fights at the pumps and drivers hoarding fuel in water bottles after an acute shortage of truck drivers strained supply chains to breaking point.

Shortages of workers in the wake of Brexit and the COVID pandemic have sown disarray through some sectors of the world's fifth-largest economy, disrupting deliveries of fuel and medicines and even raising fears of a mass cull of livestock.

British ministers have for days insisted the crisis is abating or even over, though retailers said more than 2,000 gas stations were dry and Reuters reporters across London and southern England said dozens of pumps were still closed.

Queues of often irate drivers snaked back from those gas stations that were still open in London.

The Petrol Retailers Association (PRA), which represents 65 per cent of Britain's 8,380 forecourts, said members reported on Thursday that 27 per cent of pumps were dry, 21 per cent had just one fuel type in stock and 52 per cent had enough petrol and diesel.