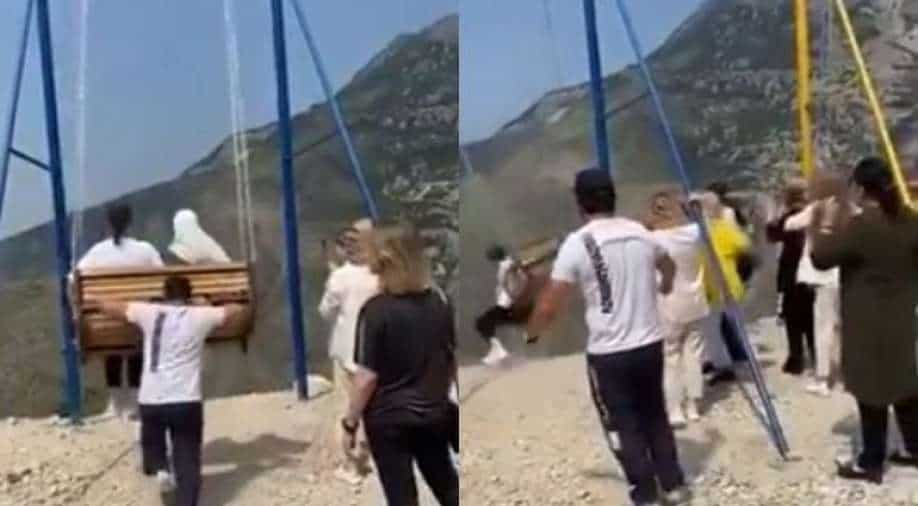 Two women plunge off the top of a 6,300-feet-high cliff in Russia as swing breaks. Photograph:( Twitter )

In a viral video, two women can be seen plunging off the top of a 6,300-feet-high cliff in Russia after the swing in which they were riding breaks. The incident occurred at Sulak Canyon in Dagestan region

In a chilling video, which has gone viral on social media, two women can be seen plunging off the top of a 6,300-feet-high cliff in Russia after the swing breaks in which they were riding.

One of the chains of the cliff swing snapped, sending the women down the cliff. The incident occurred at Sulak Canyon in Russia’s Dagestan region.

However, the women escaped with minor bruises and scratches, as their fall was interrupted by a wooden panel located just beyond the cliff edge, a Daily Mail report said.

Moment two women fell off a 6000-Ft cliff swing over the Sulak Canyon in Dagestan, Russia.
Both women landed on a narrow decking platform under the edge of the cliff & miraculously survived with minor scratches.
Police have launched an investigation. pic.twitter.com/oIO9Cfk0Bx

Prompt action by the onlookers and relatives in lifting the women up proved fruitful in saving their lives. The local police are also investigating the incident, as per media reports.

The local authorities are also looking to remove the swings, which were built and operated without proper safety standards.