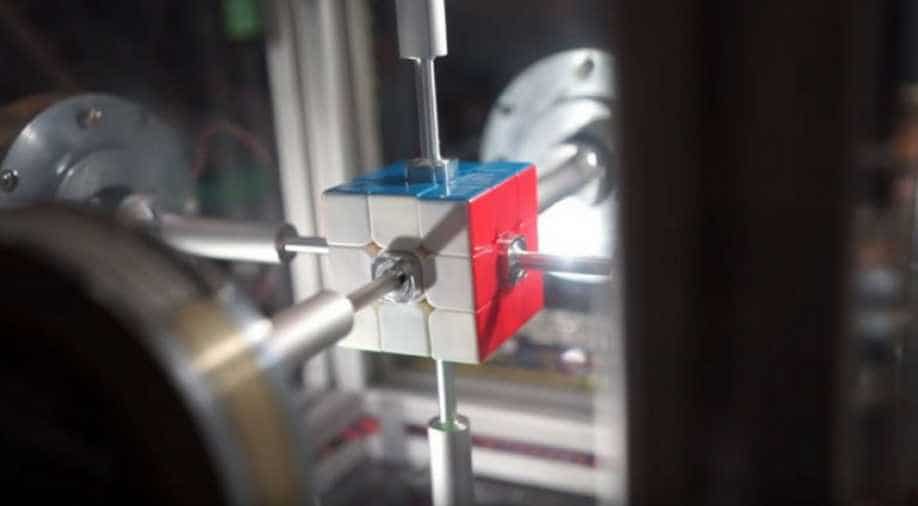 The video shows an unsolved Rubik's cube gets solved in just 21 moves. Photograph:( Others )

In 2016, a world record was made by chipmaker Infineon whose's robot solved the puzzle in 0.637.

The video was uploaded on YouTube on Wednesday by Ben Katz in collaboration with Jared Di Carlo.

In the blog post, Jared Di Carlo wrote "recently, Ben Katz and I collaborated on a Rubik's Cube solving robot to try to beat the world record time of 0.637 seconds, set by some engineers at Infineon.  We noticed that all of the fast Rubik's Cube solvers were using stepper motors, and thought that we could do better if we used better motors."

He further explains ''our solve time of 0.38 seconds includes acquiring the image from the webcam, detecting colours, finding a solution, and actually rotating the faces of the cube.  In the video, the machine is solving a 'YJ Yulong Smooth Stickerless Speed Cube Puzzle', available on Amazon for $4.55.  We used the cheapest cube we could find on Amazon Prime because we thought we'd end up destroying many of them, but somehow ended up only going through 4 cubes and 100's of solves."

The robot is a set of 6 Kollmorgen ServoDisc motor U9- series motors and 2 PlayStation Eye cameras.

The video shows an unsolved Rubik's cube which gets solved in just 21 moves.