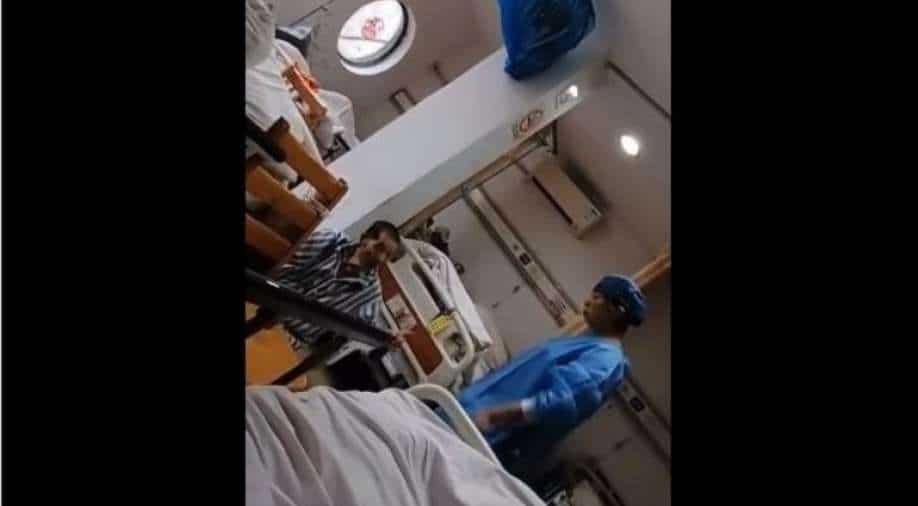 Officials in Shanghai have suspended the health-care worker. Photograph:( Twitter )

A female nurse is shown kicking and striking an elderly man who is kneeling on the ground with an item while also lecturing him in the video.

In its fight against COVID-19, the situation in Shanghai threatens to spin out of control. On multiple fronts, the worldwide economic hub and major port has been grappling.Shanghai residents' social media messages about the city's lockdown and food shortages have gone viral throughout the world.

The city is struggling on many levels, one of which is the poor treatment inhabitants receive from government and health-care employees.

However, a healthcare worker in Shanghai has been suspended after being seen on camera kicking an elderly man in a hospital, causing an uproar and once again bringing the city's medical system into the spotlight.

A female nurse is shown kicking and striking an elderly man who is kneeling on the ground with an item while also lecturing him in the video.

The video, which was presumably shot by another patient, sparked indignation among Chinese internet users, with one person claiming that the hospital staff's professional ethics had been "fed to the dogs."

In a statement released Thursday, health officials said they "placed significant attention on the event and swiftly organised a team to investigate the matter," adding that the police have initiated their own probe.

However, widespread disrespectful behaviour in health care goes unchecked, as seen by multiple recent incidents around the world.

It may be found at all levels of the organisation and within all disciplines of personnel.