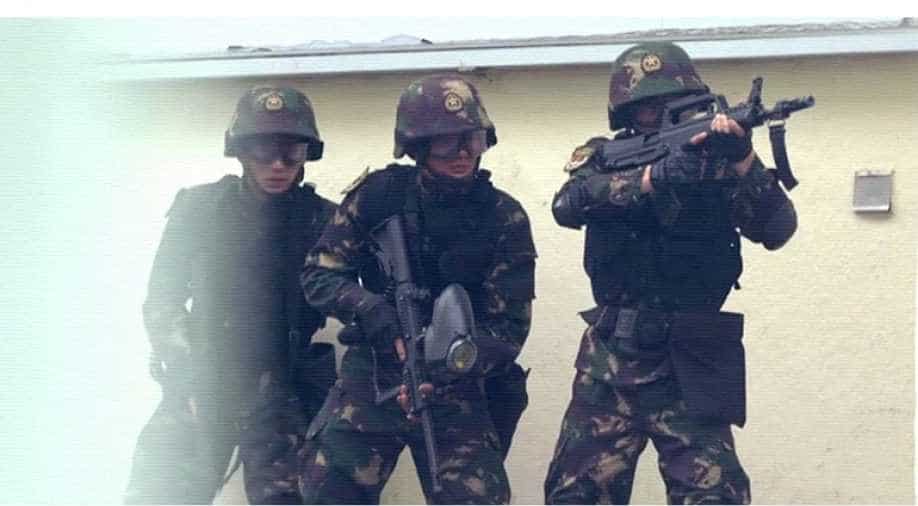 The PLA has remained in barracks since protests started in April, leaving Hong Kong's police force to deal with the massive and often violent protests in the Asian financial hub. Photograph:(Reuters)
Follow Us

The three-minute video included footage of troops firing guns and rockets, and of light tanks, attack helicopters and missile launchers.

The PLA has remained in barracks since protests started in April, leaving Hong Kong's police force to deal with the massive and often violent protests in the Asian financial hub.

On Wednesday, 44 people were charged with rioting, the first time authorities have resorted to using the rioting charge.

In one sequence in the PLA video, titled "anti-riot drill footage", ranks of troops advance with shields and truncheons on protesters, firing rifles into the air. Tear gas and water cannons rained down on protesters, as armoured personnel carriers with battering rams raced forward, and troops laid barbed wire coils on the ground.

"All consequences are at your own risk," one soldier shouted in Cantonese, the main Chinese dialect in Hong Kong, during the video clip.

A red flag with the words "Warning. Stop charging or we use force" was also held aloft, similar to what Hong Kong police have long used during protests.

At the end of the clip, several protesters with their hands cuffed can be seen being taken away.

Hong Kong has been plunged into its biggest political crisis since the former British colony's return to Chinese rule in 1997 with a wave of protests against a now suspended extradition bill which would see people sent to mainland China for trial in Communist Party-controlled courts.

The protests which started in April have now transformed into broader demands including the resignation of Hong Kong's embattled leader Carrie Lam, and calls for a "free Hong Kong".

As tensions continue to rise, clashes between protesters and police have become increasingly violent.

Chinese authorities have strongly condemned the violence and issued reminders that Hong Kong authorities can request the assistance of the PLA Hong Kong garrison if necessary.

Diplomats and foreign security analysts are watching the situation closely, but believe there's little appetite in Beijing for the PLA to be deployed on the streets of Hong Kong.

The role of the PLA in Hong Kong has long been one of the most sensitive elements of the city's handover to China.

"We believe that the Hong Kong garrison of the People's Liberation Army will continue to become a stabilising pillar for Hong Kong's long-term prosperity and stability," Chinese Foreign Ministry spokeswoman Hua Chunying said at a briefing in Beijing when asked about the video.

Amid growing speculation troops could be unleashed to quell the violence, police chiefs have insisted their forces are capable of maintaining order.

Hong Kong returned to Chinese rule with a guarantee of its freedoms, including the right to protest and an independent judiciary not enjoyed on the mainland, for at least 50 years.

Under its mini-constitution, the Basic Law, defence and foreign affairs are managed by Communist Party leaders in Beijing.

Chen Daoxiang, the commander of the PLA's Hong Kong garrison said on Wednesday the violent protests in Hong Kong are "absolutely impermissible" according to the state-run China Daily newspaper.

Speaking at a reception to mark the 92nd anniversary of the PLA, Chen said the protests were "putting the bottom line of the "one country, two systems" principle to the test".

He added the PLA would "resolutely safeguard" the country's sovereignty and security, as well as Hong Kong's stability.

In July, Reuters reported that Chen had assured a Pentagon official that Chinese troops will not interfere in the city's affairs despite the political upheaval.