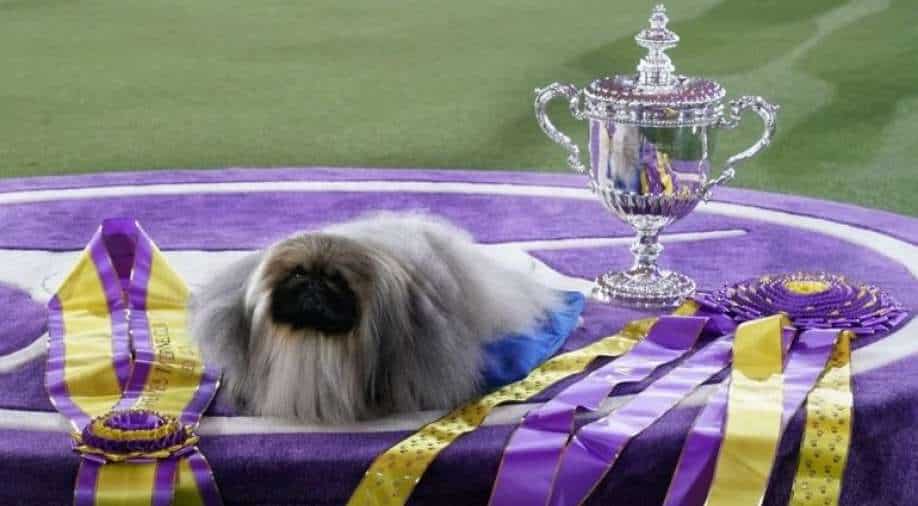 Pekingese dog "Wasabi" is seen with the trophy after winning Best in Show at the 145th Annual Westminster Kennel Club Dog Show June 13, 2021 at the Lyndhurst Estate in Tarrytown, New York Photograph:( AFP )

Three-year-old Wasabi was crowned best in show from a pack of seven group winners which also included Mathew, a French bulldog; Connor, an Old English sheepdog; and Striker, a Samoyed

Wasabi, a fluffy Pekingese with a black and brown face and soulful eyes, won Best in Show at the Westminster Kennel Club Dog Show in Tarrytown, New York.

Normally held in February, the show was delayed and moved from its home in the heart of New York City to a country estate due to COVID-19.

Spectators were kept away and it was the show's first time being held outside Manhattan, but the singular passion of the event, now in its 145th year, was unchanged: dogs.

Three-year-old Wasabi was crowned best in show from a pack of seven group winners which also included Mathew, a French bulldog; Connor, an Old English sheepdog; and Striker, a Samoyed.

Bourbon the whippet came in second.

Speaking a day earlier when Wasabi won the toy group, his owner and handler David Fitzpatrick, who also won "Best in Show" in 2012, lauded his pooch's "charisma, movement and showmanship."

"He's in his prime and he just looks wonderful," he added.

The event, an annual celebration of purebred dogs from across the spectrum in size, shape and fur types, brought together over 2,000 candidates from more than 200 breeds.

Dogs are judged on the basis of how well they stack up against breed characteristics as set by the American Kennel Club.

Breeds are assessed not just in terms of how they move, but whether their facial expressions show what is deemed proper vigilance or merriment.

Held annually since 1877, the show is one of the oldest and most popular sporting events in the United States. Dogs from more than 200 different purebred breeds can compete, with judges determining which contenders best conform to their breed's standards.

Wasabi and Bourbon beat thousands of other dogs to win Best in Show at the American Kennel Club National Championship in 2019 and 2020 respectively.