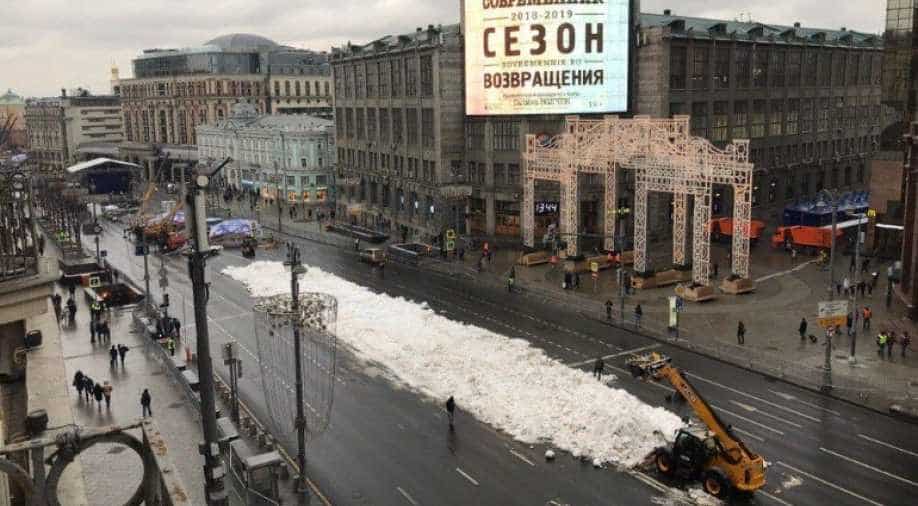 The bringing of artificial snow has amused social media users as ironically the city traditionally calls in trucks to remove snow.

Russia's capital city Moscow, which is known for its bone-chilling winter, has brought artificial snow for decorations ahead of the New Year's Eve.

Moscow is witnessing one of its warmest winters in December since temperatures began getting recorded 140 years ago. The government is sending trucks filled with artificial snow for decorating a new year display in the city centre.

In one of Moscow's main avenues, a strip of snow is laid.

The bringing of artificial snow has amused social media users as ironically the city traditionally calls in trucks to remove snow.

On December 18, the temperature in the Russian capital jumped to 5.4 degrees Celsius, which shattered the record of the month in 1886.

Some local residents have expressed their disappointment that the absence of snow is not giving them a feel of winters.

Это весь снег, который есть в Москве. Его охраняют на Красной площади 😂 This is all the snow there is in Moscow. It is being guarded on the Red Square 😂🙈😂 #москва#декабрь#краснаяплощадь#гум#снег#погода#тепло#скороновыйгод#moscow#instamoscow#december#redsquare#gumstore#nikolskaya#snow#weather#warm#soonnewyear#city#cityscape#citylife#photographylover#photography#photooftheday

The warm weather in Russia has raised concerns of global warming as ice melting in polar regions is one of its signs.

At an annual news conference on December 19, Russian President Vladimir Putin acknowledged that climate change could create major problems in the country.

However, Putin refused to blame human activity for climate change.