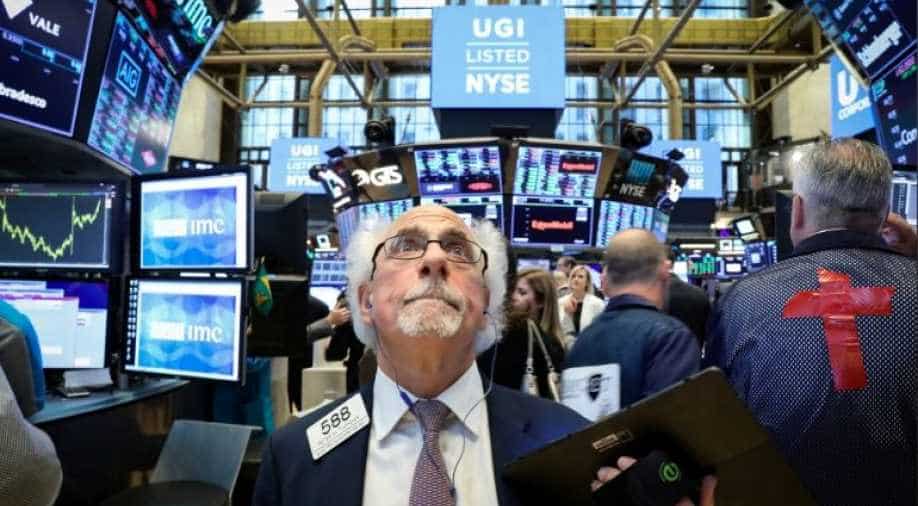 Traders work on the floor at the New York Stock Exchange (NYSE) in New York, US. Photograph:( Reuters )

A clutch of discouraging manufacturing surveys in the past 24 hours from around the world that rekindled fears of a global economic slowdown added to the cautious mood.

US stock index futures indicated to a flat opening on Tuesday, a day after the benchmark S&P 500 index hit a record high, as optimism sparked by the US-China trade truce waned and a fresh threat of tariffs on Europe kept investors on edge.

A clutch of discouraging manufacturing surveys in the past 24 hours from around the world that rekindled fears of a global economic slowdown added to the cautious mood.

US markets rose on Monday as Washington and Beijing agreed to resume trade talks and President Donald Trump offered concessions including no new tariffs and an easing of curbs on Huawei Technologies Co Ltd.

However, Washington threatened to slap tariffs on $4 billion of additional EU goods, ratcheting up pressure on Europe in a long-running dispute over aircraft subsidies.

"While the threat of additional tariffs on EU imports is still an overhang for investors, the market is more likely taking a breather until new macro-economic data comes out," Peter Cardillo, chief market economist at Spartan Capital Securities said.

Investors are waiting for the monthly jobs report on Friday, which is expected to show that the private sector added 160,000 jobs in June, after a sharp slowdown in jobs growth in May.

The S&P 500 and the Dow Jones indexes posted their best June performance in decades, on hopes that the Federal Reserve would cut interest rates to preserve a decade-long US expansion, after a breakdown in trade talks in May sent markets into a tailspin.

Market participants still expect a rate cut by the Fed of at least a quarter of a percentage point at its July 30-31 policy meeting, despite the latest developments in trade talks.

Among stocks, Western Digital Corp fell 3% in premarket trading after Benchmark cut its rating on the hard-disk drive maker's stock to "sell."

Coty Inc dropped 4.1% as multiple brokerages cut price targets on the cosmetics maker's shares, a day after the company said it would restructure and write down about $3 billion in value of brands acquired from Procter & Gamble Co.

Gilead Sciences Inc rose 1% after the drugmaker said it will submit a new drug application for its arthritis drug to the US FDA this year.