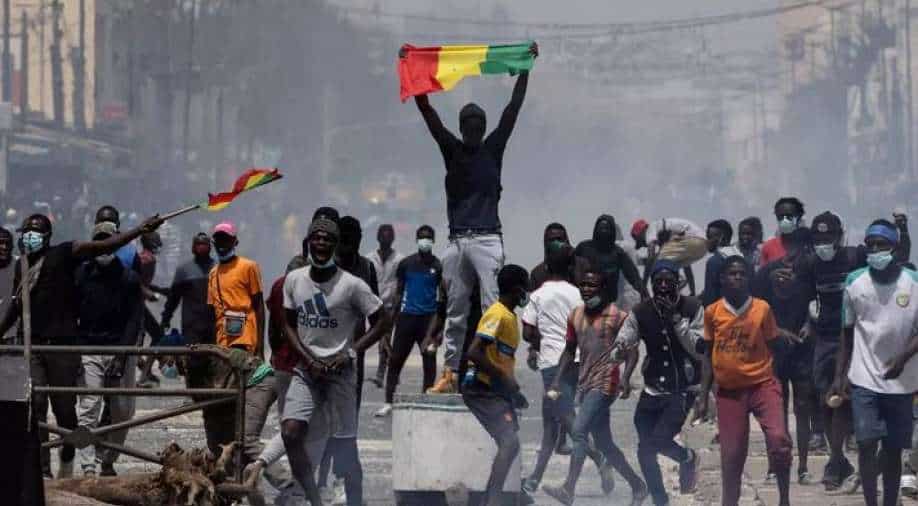 A demonstrator holds up a Senegalese flag during protests against the arrest of opposition leader and former presidential candidate Ousmane Sonko in Dakar, Senegal, on March 5, 2021. Photograph:( AFP )

Sonko, who enjoys strong support among the young, was arrested after an employee of a beauty salon accused him of raping her. Sonko denies the allegation and says it is politically motivated.

At least five people have died in demonstrations sparked by the arrest of Ousmane Sonko, Senegal’s most prominent opposition leader. It is the worst political unrest in years in a country widely seen as one of West Africa’s most stable.

Situated in the western-most part of Africa, Senegal is a majority-Muslim nation with relatively low human development. It is witnessing the worst unrest in nearly a decade.

Sonko, who enjoys strong support among the young, was arrested after an employee of a beauty salon accused him of raping her. Sonko denies the allegation and says it is politically motivated.

His supporters say — the charges are politically motivated. They accuse Senegal’s president Macky Sall of trying to sideline and kill the political prospects of this leader in the 2024 general election.

The opposition Movement to Defend Democracy coalition, which called three days of nationwide protest starting from Monday, said the charges were politically motivated. It called on the Senegalese people “to pursue its mobilization and peaceful struggle by using all of its constitutional rights to reject the dictatorship of Macky Sall,” the country’s president.

Following his release, Sonko said at a news conference that the street protests would continue and state authorities must pay compensation to the families of those killed during the protests and the assailants had to be brought to justice.

Sonko said that "This mobilization must be maintained. It must even be much larger, but it must above all be peaceful. It must be peaceful. Today, the people have regained the right that Macky Sall confiscated nine years ago at the demonstration. The people have taken it back by force; we must not lose this right."

Political pressure has mounted on President Sall, whose presidency has been plagued by accusations that he unjustly torpedoes political rivals and worries that he may seek to extend his rule beyond his allotted two-term limit.

The economic devastation caused by the COVID-19 pandemic and a nightly curfew to contain its spread have only stoked frustrations.