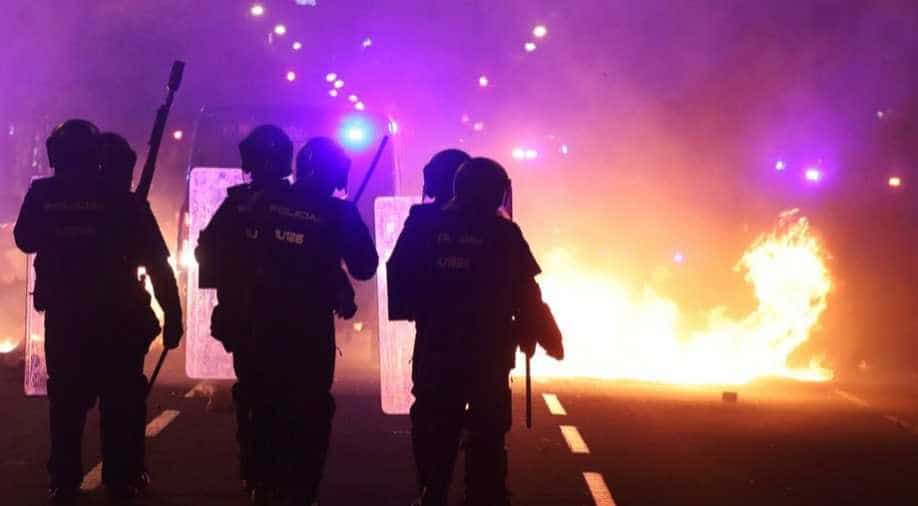 Police officers walk towards the fire during a protest after a verdict in a trial over a banned Catalonia's independence referendum in Barcelona, Spain. Photograph:( Reuters )

As the Catalan capital echoed with the sound of sirens and masked youths staged running battles with riot police, Spain's Pedro Sanchez had made a direct appeal to Torra to 'clearly condemn' the violence.

Catalan president Quim Torra called for an immediate halt to the violent clashes that rocked Barcelona for a third day Wednesday, warning they were harming the image of the separatist movement.

As the Catalan capital echoed with the sound of sirens and masked youths staged running battles with riot police, Spain's Pedro Sanchez had made a direct appeal to Torra to "clearly condemn" the violence.

Earlier on Wednesday, thousands gathered for a protest called by the radical CDR.

But as the evening wore on, the situation quickly became chaotic, with hundreds running through the streets, hurling broken paving stones, torching cars and occasionally stopping to take selfies in front of the burning barricades.

"This isn't violence, it's self-defence," roared a group of masked youngsters in front of a blazing barricade.

Some even threw Molotov cocktails, the regional police said, with scenes of violence also spreading to other cities in the region such as Tarragona and Leida, prompting the Catalan leader to give a televised address shortly after midnight.

"This has to stop right now," Torra said.

"There is no reason or justification for burning cars, nor any other vandalism. Protest should be peaceful.

"We cannot allow such groups who infiltrate and provoke to harm the image of a movement which counts millions of Catalans," he added.

Until now, Torra has not made any comment on the violence which erupted on Monday just hours after the Supreme Court handed down heavy prison sentences to nine Catalan leaders for their role in the failed independence bid of 2017.

So far, Madrid has shown little appetite for taking matters into its own hands, despite the ongoing protests in Barcelona and elsewhere that have hit screens around the world as Catalan separatists have made their anger known.

The latest crisis began just over two years ago when Catalonia's separatist leaders held a banned referendum then issued a short-lived declaration of independence, prompting Madrid to sack its government and suspend the region's autonomy.

It also put 12 of its leaders on trial, nine of whom were condemned for sedition on Monday, and handed prison terms of between nine and 13 years.

Earlier on Wednesday, as the crowds massed in central Barcelona, many began hurling toilet rolls into the air in response to a slogan by the movement saying there was "a lot of shit to clean up".

"I'm just a bag of nerves," said Jose Ramon Garcia, one elderly local resident who had stepped out for a quiet drink and found himself caught up in the protests.

"I was just sitting calmly in the bar and suddenly the appeared from all directions," he told AFP. "And these are 'peaceful' demonstrators?"

Elsewhere an 18-year-old student with an independence flag around his shoulders said many had simply lost the will to protest peacefully.

"It's a reaction to what the police did on October 1 to shut down the referendum and against what the justice system did on Monday in condemning the separatist (leaders)," Bernat Busquet told AFP of the ill-fated referendum which was marred by violence.

Just hours after the verdict was announced, some 10,000 protesters swarmed Barcelona's El Prat airport, cutting off transport links and forcing the cancellation of more than 100 flights.

Riot police charged at the demonstrators on several occasions, firing foam rounds into the crowds, with the emergency services saying 115 people were injured, including a protester who lost sight in one eye.

A day later, hundreds of protesters, many of them masked, fought running battles with hundreds of riot police, hurling projectiles and torching barricades, with 125 demonstrators and 72 police officers injured, officials said.

The protests continued Wednesday, with thousands of people joining five mass marches from towns throughout the region heading for Barcelona, with the aim of causing chaos on the roads in one of Spain's most important economic regions, which is also a bottleneck for traffic with France and elsewhere in Europe.

The marchers plan to converge in Barcelona on Friday when unions have called a general strike in the region.

The court ruling and sentences have thrust the Catalan dispute to the heart of the political debate ahead of Spain's November 10 general election, its fourth in as many years.