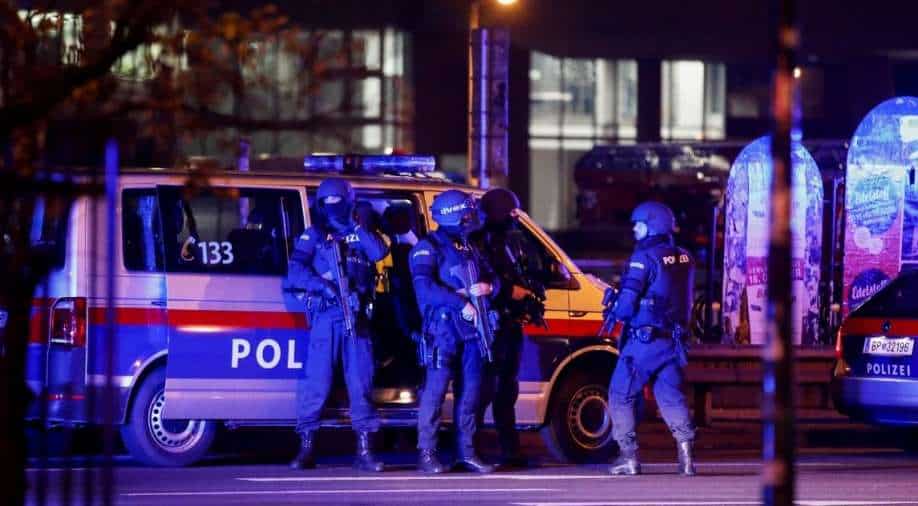 Police officers stand guard on a street after exchanges of gunfire in Vienna, Austria Photograph:( Reuters )

Global leaders on Monday condemned the ''terror attack'' in Vienna in which at least three people have been killed and 15 injured after multiple gunmen opened fire.

The perpetrators of the Vienna attack have yet to be identified, but the shootings follow a spate of Islamist attacks in France that have set the nation on edge.

Austrian Chancellor Sebastian Kurz described it as a "repulsive terrorist attack" and said the army would protect sites in the capital so the police could focus on anti-terror operations.

Speaking to ORF, he said the attackers "were very well equipped with automatic weapons" and had "prepared professionally."

Police said on Twitter that at least one person had been killed and that the injured included a police officer. Vienna mayor Michael Ludwig told ORF that 15 people were being treated in Vienna hospitals and that seven were in serious condition.

US President Donald Trump criticised the ''vile act of terrorism in Europe'' and vowed his support against ''radical Islamic terrorists''.

Our prayers are with the people of Vienna after yet another vile act of terrorism in Europe. These evil attacks against innocent people must stop. The U.S. stands with Austria, France, and all of Europe in the fight against terrorists, including radical Islamic terrorists.

After tonight's horrific terrorist attack in Vienna, Austria, Jill and I are keeping the victims and their families in our prayers. We must all stand united against hate and violence.

Deeply shocked and saddened by the dastardly terror attacks in Vienna. India stands with Austria during this tragic time. My thoughts are with the victims and their families.

European Union chief Charles Michel slammed the shootings in Vienna on Monday in which at least two people including one attacker died and several more were injured as "cowardly".

Europe strongly condemns this cowardly act that violates life and our human values.

My thoughts are with the victims and the people of #Vienna in the wake of tonight’s horrific attack.

We stand with Austria @sebastiankurz

French President Emmanuel Macron vowed Europe would not bow to terrorists following the shootings in Vienna.

"We French share the shock and sorrow of the Austrian people following the attack in Vienna," Macron tweeted in both French and German.

"After France, it is a friendly nation that has been attacked. This is our Europe. Our enemies must know who they're dealing with. We will concede nothing."

Israel condemns the brutal attack in Vienna and stands in total solidarity with Austria. Civilized peoples everywhere must unite to defeat the savagery of resurgent Islamist terrorism.

Italian Prime Minister Giuseppe Conte "strongly condemned" the shootings and said, "There is no room for hatred and violence in our common European home."

Germany's foreign ministry said Monday that "we cannot give in to hate that is supposed to divide our societies" following shootings in the Austrian capital.

"Even if we can't yet foresee the extent of the terror, our thoughts are with the wounded and the victims in these difficult hours," the ministry wrote on Twitter, calling the news from neighbouring Austria "horrifying and disturbing".

Russian President Vladimir Putin sent a telegram to Austrian Chancellor Sebastian Kurz, calling the attack a "cruel and cynical crime", the Kremlin said in a statement.