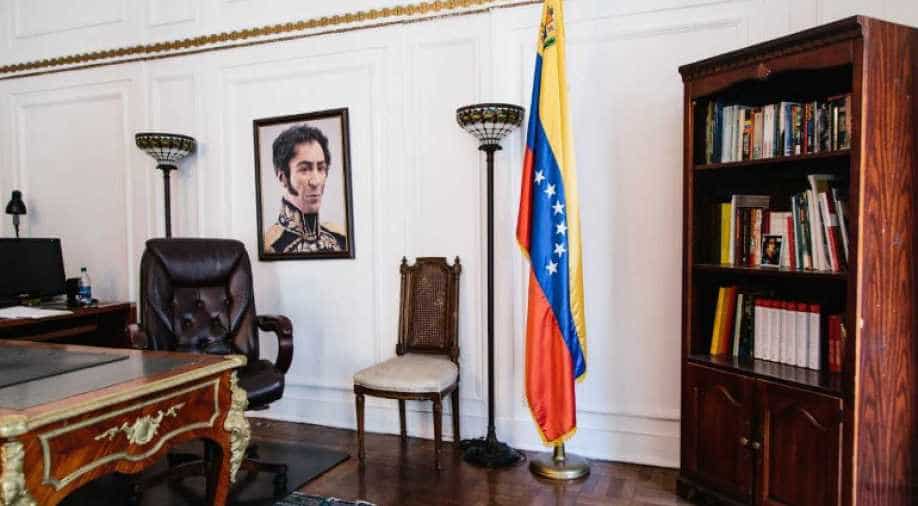 Interior of the Venezuelan consulate in New York after authorities designated by interim President Juan Guaido retook control of the facility on March 18. Photograph:( Reuters )

Still full of Chavista paraphernalia, the Venezuelan consulate in New York is now in the hands of the head of the opposition-controlled Parliament, Juan Guaido, and his supporters, who are promising to reopen the facility as soon as possible so that their countrymen can "begin to return home."

Still full of Chavista paraphernalia, the Venezuelan consulate in New York is now in the hands of the head of the opposition-controlled Parliament, Juan Guaido, and his supporters, who are promising to reopen the facility as soon as possible so that their countrymen can "begin to return home."

"We have begun the recovery of the assets of the Republic, assets that belong to all Venezuelans," Gustavo Marcano, the No. 2 official in the delegation to the US named by Guaido and the head of the Monday operation to take over the consulate, said on Tuesday.

Less than 24 hours after taking control of the consulate, Marcano opened the building's doors to a group of journalists to show them the conditions inside what many consider to be the "jewel in the crown" of Venezuelan diplomacy in the US.

The deterioration of some of the floors in the consulate, which for some time has been closed to the public, is evident, with wrecked and perforated ceilings and significant damage to walls and floors.

On other floors, in much better shape and filled with symbols of the Bolivarian Revolution, one can still see drinking glasses on the tables and personal items strewn around, as if people had left the facility in a great hurry.

According to Marcano, that is indeed more or less what occurred, given that the building was being "occupied" by "officials of the Nicolas Maduro regime."
Those people were mainly, he said, personnel accredited to Venezuela's mission to the United Nations, which remains in the control of the Maduro regime, although nobody was in the building when the diplomat and his team broke the locks on Monday afternoon.

Marcano, an opposition figure who previously served as a city mayor and lawmaker, insisted that the recovery of the consulate was "absolutely according to the laws."

The US, which was the first country to recognize Guaido as Venezuela's president after he proclaimed himself the country's interim leader on January 23, has accredited the envoys he has named as diplomatic representatives, including Carlos Vecchio, who was tapped to be the opposition government's ambassador to Washington.

"Since yesterday, this space is being occupied by the legitimate government of Venezuela, by the diplomatic mission of the Venezuelan embassy to the United States. And, more importantly, this space soon will be open to all Venezuelans," Marcano said.

He added that this is a first step "so that we Venezuelans can begin to return home."

"When we set foot inside this consulate yesterday, we felt that the Venezuelans who have fought for freedom, ... who have suffered, who have endured all this struggle against the narco-regime that Nicolas Maduro heads, (that) we're conquering spaces, we're liberating spaces," he said.

At present, Guaido's representatives are focusing on taking an "inventory" of everything that they are finding inside the consulate, including the diplomatic pouch, computers and other materials with an eye toward preparing a report that they are intending to make public.

"There could be items of a criminal nature - that wouldn't surprise us," said Marcano, who also wants to assess the damage caused to state properties, including works of art that he and his colleagues say were removed to make room for portraits of the late Hugo Chavez and Maduro.

As a political gesture, on Monday a photograph of Chavez that hung on the wall was removed and replaced with a poster announcing the pending reopening of the consulate.

According to Marcano, the facility will soon be "free of any kind of political propaganda."

The downtown Manhattan consulate - a six-story building valued at millions of dollars - is a symbol for Guaido, since it is the most important diplomatic facility he controls in the US and, in contrast to others, it remains the property of the Venezuelan state.

The intention of the new landlords is to reopen the consulate within several weeks and to start providing services to Venezuelans.

The first step, they said, will be to begin registering all the Venezuelans who are in the US and to listen to their concerns.

The Maduro government, meanwhile, is denouncing the fact that the New York consulate and other diplomatic facilities are "being forcibly occupied" with the support of US authorities.

Besides the consulate, Guaido's representatives on Monday took charge of two Venezuelan Defense Ministry buildings in Washington and are intending to do the same in the near future with the embassy in the US capital and other diplomatic installations.