Venezuela's Maduro blasts US for 'stealing' billions and offering 'crumbs' 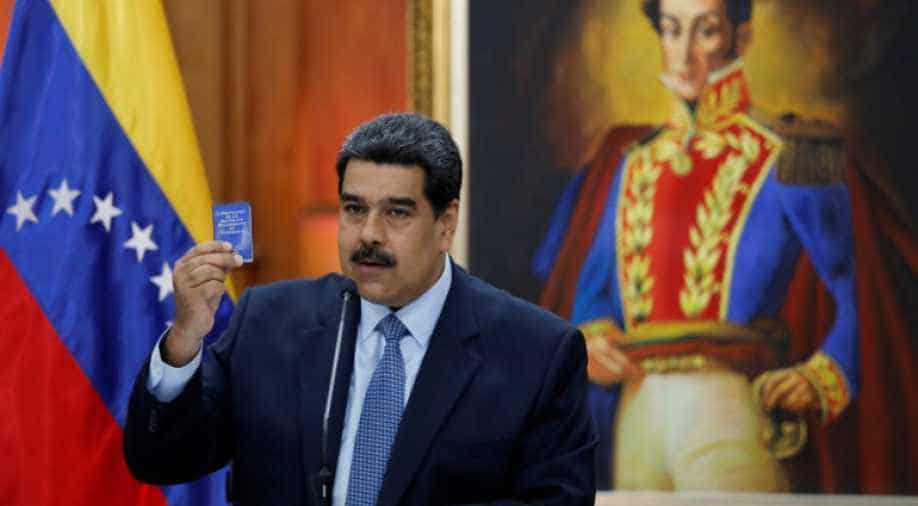 Tons of US aid is piling up in Colombia close to the border with Venezuela as opposition leader Juan Guaido has vowed to defy Maduro's efforts to block the supplies from entering the country.

Venezuela President Nicolas Maduro hit out at the United States on Friday for "stealing" billions of dollars and offering "crumbs" in return as humanitarian aid.

Tons of US aid is piling up in Colombia close to the border with Venezuela as opposition leader Juan Guaido has vowed to defy Maduro's efforts to block the supplies from entering the country.

"It's a booby trap, they're putting on a show with rotten and contaminated food," said Maduro, speaking at an event in the southeastern town of Ciudad Bolivar.

Venezuela is in the midst of an economic crisis that has left millions in poverty and facing shortages of basic necessities such as food and medicine.

Guaido, who is recognized by 50 countries as the interim president, accuses Maduro of causing economic hardship through mismanagement.

Among those countries is Costa Rica, whose foreign affairs ministry on Friday gave three Maduro-appointed diplomats "60 calendar days" to leave the country.

Maduro meanwhile blames Venezuela's woes on US sanctions, claiming they have cost the country $30 billion.

The 56-year-old, the hand-picked successor to socialist firebrand Hugo Chavez, branded it the "war of the oligarchy."

Humanitarian aid has become a key issue in the power struggle between Maduro and Guaido.

The opposition leader, who last month declared himself acting president, has promised to bring in the aid on February 23.

Maduro refuses to let it in. And his loyal military has barricaded a border bridge between Venezuela and Colombia.

The socialist leader insists the aid is just a cover for a planned US military invasion, while Guaido says 300,000 people could die without the desperately-needed aid.

Speaking on Friday, Maduro said six million families had benefitted from subsidized food boxes and claimed to have bought 933 tons of medicines and medical supplies from China, Cuba and Russia, his main international allies.

"We paid for it with our own money because we're beggars to no one," he said.

Guaido accuses Maduro of being a "usurper" over his controversial reelection last year in polls widely branded fraudulent.

Maduro says the 35-year-old National Assembly speaker is a puppet to the US, which is trying to secure access to Venezuela's gold and vast oil reserves -- the largest in the world.

He said Guaido's challenge to his authority is "treason."

"The worst thing is stimulating the imperial madness of an extremist Ku Klux Klan government in the White House," said Maduro.