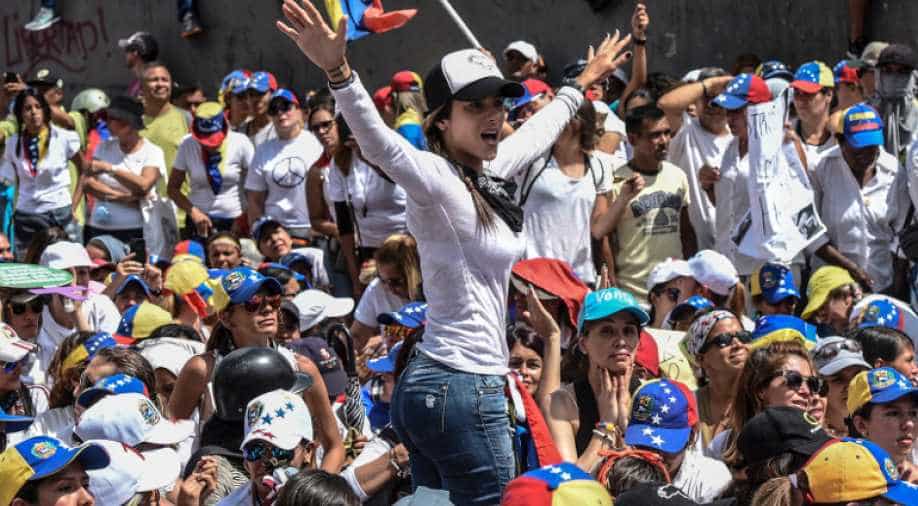 Thousands of women dressed in white marched in Venezuela's capital on Saturday to maintain pressure on President Nicolas Maduro, whose authority is being increasingly challenged by protests and deadly unrest.

Police and soldiers prevented it from reaching the interior ministry, but no clashes or other violence took place during daytime.

A lawmaker taking part in the protest, Gaby Arellano, told AFP that some in the security forces "were wondering if today they were going to open fire on their wives, daughters or mothers."

They were the latest in more than a month of anti-government demonstrations, many of which have been countered by pro-Maduro crowds and security forces.

The death toll since April -- when the protests intensified after Maduro's administration and the courts stepped up efforts to undermine the opposition -- is at least 36, according to prosecutors.

"May the last death be that of the dictatorship," one slogan in the Caracas rally read.The last death in Venezuela's unrest, of a 22-year-old man, occurred Friday during looting in impoverished Venezuelan cities hardest hit by a worsening economic crisis. In Valencia, where the man died, some areas looked like disaster zones with bars on shop windows bent and windows broken.

Demonstrators blame Maduro for the country's plight and the penury of food and medicine. They are demanding elections to remove the leftist president.

Maduro, backed by the Venezuelan military, is resisting. He and the opposition have blamed each other of using armed groups to sow violence.

The president has started a process to rewrite the current constitution enacted under his late predecessor and mentor Hugo Chavez. The opposition and many protesters say his real aim is to dodge elections.

With anger boiling over, young protesters in the western municipality of Rosario de Perija on Friday burned, pulled down and then smashed a statue of Chavez, shown in a video posted on social media.

"We are out here pushing for justice against those who are encouraging hatred and rage," she said, warning, "they are trying to set the stage for civil war."

The conference of Catholic bishops issued a statement quoting Pope Francis as expressing concern about the "dead, wounded and detained" in the protests and asking both sides to look for "negotiated solutions."Maduro and his officials say the crisis rocking the country is a US-backed conspiracy designed to topple him and install a right-wing government.

The United States, which had remained relatively quiet over the situation in Venezuela, is now taking a stronger tone against Maduro's "violent crackdown on protestors."

The US ambassador to the UN, Nikki Haley, said in a statement that his "disregard for the fundamental rights of his own people has heightened the political and economic crisis in the country."

She called for the immediate release of "political prisoners," including Lopez, who has been "held on trumped up charges by the government since 2014."

Haley also raised the issue of Venezuela's detention of an American citizen, Joshua Holt, arrested in Caracas nearly a year ago on what US media said was false evidence planted by police.

A White House statement said the leader of Venezuela's opposition-held legislature, Julio Borges, had met on Friday with US National Security Adviser H.R. McMaster. Both agreed "there is a strong need to bring the crisis to a quick and peaceful conclusion."

Although the statement made no mention of it, a senior administration official later told AFP that US Vice President Mike Pence had also met Borges, but "did not participate in the full meeting with General McMaster."