Venezuela: With no water, Caracas residents' patience is drying up 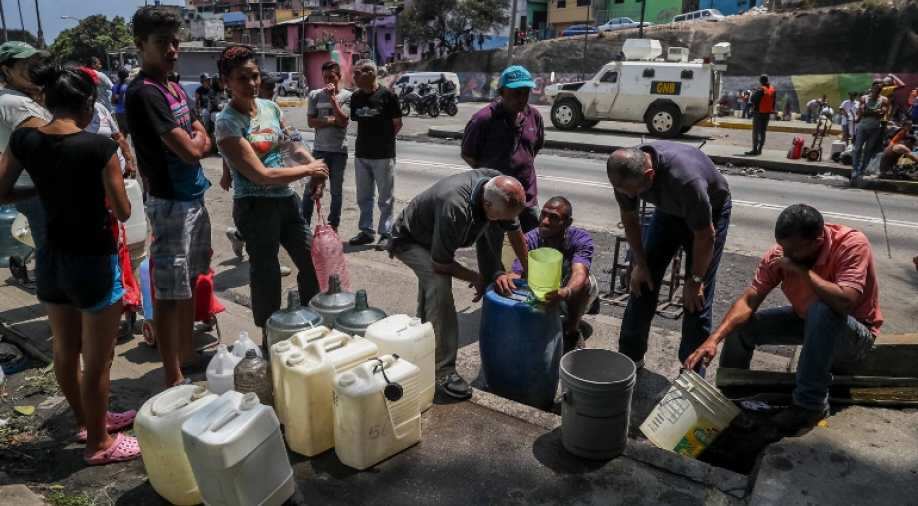 In the residential districts of Caracas, the tired faces show irritation when people start to talk about who's to blame for the situation that for weeks has mired Venezuela amid a series of power blackouts.

The lines in front of the water spigots are the same for the government-supporting Chavistas and the opposition non-Chavistas.

In the residential districts of Caracas, the tired faces show irritation when people start to talk about who's to blame for the situation that for weeks has mired Venezuela amid a series of power blackouts.

Residents of the shantytowns strewn over the hills of the capital look for water from pipes, fountains and abandoned cisterns without regard for their political affiliation, patiently filling containers, decanters or big bottles to take the precious liquid back home with them.

"As far as I'm concerned, we're in resistance because if we were just an agricultural country, none of this would be happening," said Orlando Iturbe, a 47-year-old businessman, standing before some pipes out of which water is running at an abandoned construction site in the capital's downtown.

He repeats the theory that the opposition and the United States are to blame for sabotaging the electricity grid, the story that the Nicolas Maduro regime has pushed to explain why - since March 7 - the country has been experiencing repeated power outages, each lasting several days, that have prevented the electric pumps from sending water through the pipes.

"It's unconventional warfare, which is our modern war if we were a country that didn't have any more crops ... Because we have all kinds of wealth, what happens? The United States wants the whole pie," he said.

Behind him, Pascual Escalona is watching the man with an amazed look on his face until Iturbe starts criticizing the opposition and then he can't contain himself any longer.

"What opposition? The one who has the power here is the government!" he says angrily, sparking an argument in which they wind up berating each other.

Escalona is a retiree from the Graphic Arts who, like Iturbe, lives in La Pastora. He's tired, he says, confirming that these days he only received 18,000 bolivares (about $5) a month from his pension, and that's not enough to buy even a carton of eggs.

"We were happy here. We had a few beers, we messed around, we screwed around and now we're hungry. Look, no light, no telephone, we don't have a damn thing," he said.

"Now, brother? We're looking for water like a bunch of a-holes. This is a real humiliation. They've got us humiliated!" he added.

He said that last night at his house with his two little girls some tear gas drifted in and they inhaled it, evidently fired by the police at protesters somewhere nearby.

Iturbe, who is now the one looking irritated, replies: "OK, so weren't they blocking the streets with barricades?"

Not far away, dozens of vehicles are parked along Avenida Baralt, which circles Avila Hill, while hundreds of people scour around tirelessly for water in the streams and drains.

Alexander, a 45-year-old peddler, says that over the past five days he climbed up and down to one of the streams to bring 50 buckets of water home for washing, drinking and cooking.

"What are we going to do? You boil it and you drink it. We're not going to die, man. The homeless drink dirty water and nothing happen to them," he says.

He says that he normally works as a peddler at one of the metro exits, but the metro hasn't had electricity for days and so nobody's riding it and he can't work there. But, nevertheless, he's got to get by.

"Hell, man, I don't know how much more these people can take of this because the truth is that it's a nuisance, it's tough ... Another month? Weren't there protests all over the place yesterday?" he said.

Virgilio Rodriguez, a 62-year-old businessman, lives in a nearby neighbourhood. He began by saying that he's apolitical but he had only been talking for a few seconds when his indignation betrayed him.

"I don't know. I don't get involved in politics. But there's got to be a change here because we can't go on like this," he remarked.

"The people are in need. (The well-off) aren't having any problems and they have everything in their homes. Do you see (former Vice President) Elias Jaua standing in line to look for water or to buy food?" he said.

Nearby, standing in the stream, a man is washing his little daughter with soap. When your reporter identifies himself and asks him why he's here, the man says he doesn't want to talk.

"I don't know whether you guys are with the CIA," he adds.