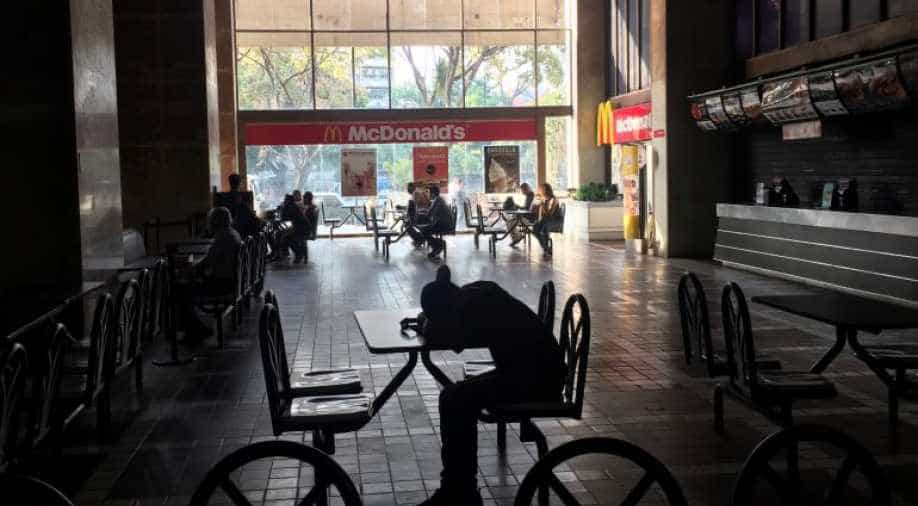 People are seen in a shopping center during a blackout in Caracas, Venezuela March 8, 2019. Photograph:( Reuters )

President Nicolas Maduro 'has suspended classes and the working day today in order to facilitate the efforts for the recovery of electric service in the country,' wrote Vice President Delcy Rodríguez on her Twitter account.

Venezuela shut schools and suspended working hours on Friday after the capital Caracas and other major cities awoke without electricity for a second day due to a problem that struck the South American country's main hydroelectric plant.

Much of Venezuela had no electricity since Thursday afternoon due to problems at the Guri dam plant, in a long blackout that affected the telephone network and the metro service in Caracas.

President Nicolas Maduro "has suspended classes and the working day today in order to facilitate the efforts for the recovery of electric service in the country," wrote Vice President Delcy Rodríguez on her Twitter account.

On Thursday, the Minister of Electric Energy Luis Motta Domínguez attributed the difficulties at the hydroelectric plant to "sabotage", without providing further details.

Power cuts have become frequent in the OPEC member nation, which has suffered five years of deep recession and hyperinflation that has eroded the quality of public services.

In Caracas, scores of people walked through the streets early in the morning due to the closure of the metro, while others took the few buses that were circulating. Many had not realized the workday had been suspended because they were unable to watch television or listen to the news.

"This is a severe problem. It is not just any blackout," said Luis Martinez, a 53-year-old walking to work in eastern Caracas.

Reuters witnesses could only corroborate that there was light in Puerto Ordaz, a city on Venezuela's southern border with Brazil.

Venezuela has been mired in a political crisis since January, when opposition leader Juan Guaidó proclaimed himself interim president invoking the Constitution.

He has been recognized by the United States and dozens of countries, which say that Maduro's reelection last year was fraudulent.

Maduro, meanwhile, says that Guaidó is a "puppet" of Washington, whom he accuses of wanting to remove him from power to seize the oil wealth of Venezuela.

At the Domingo Luciani public hospital in eastern Caracas power was kept on by an emergency generator, according to an employee cleaning the hospital.

"It's the first time we have gone a day and a night without power," said Elcida Pérez, 45.