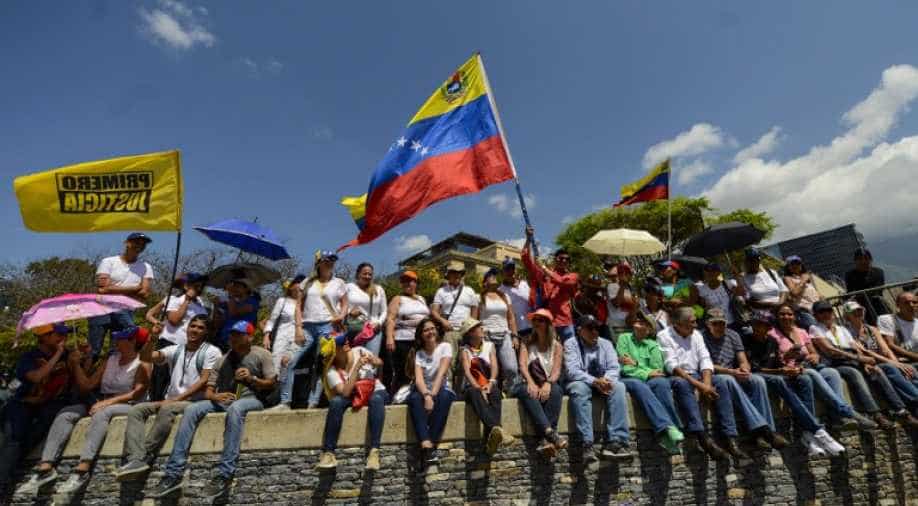 Maduro had earlier shut Venezuela's border with Brazil, where other humanitarian aid had been stockpiled.

Thousands of people are relying on illegal smugglers' routes across the Tachira River to traverse the Venezuela-Colombia border, which was closed late last month amid a row over humanitarian aid.

But that official route is currently off-limits.

On Feb. 23, amid failed attempts by his political enemies to move tons of humanitarian aid across the border from Colombia, embattled leftist Venezuelan President Nicolas Maduro announced the severing of ties with the neighboring country and the closure of the border crossings leading to the northeastern Colombian province of Norte de Santander.

Maduro had earlier shut Venezuela's border with Brazil, where other humanitarian aid had been stockpiled.

The closure of the border with Colombia affected thousands of Venezuelans who see Cucuta as an oasis in the middle of a desert of scarcity in their homeland, which is suffering from shortages of food and medicine and hyperinflation.

Desperate to get across, they are now relying on "trochas" - illegal trails normally used by smugglers and drug traffickers - to get across the shallow Tachira River that divides the two countries.

Narrow rock paths on the river bed are now serving as bridges for large numbers of people who walk under a relentless sun while carrying suitcases, sacks and bags filled with products they can't find in Venezuela.

The crowd of people includes numerous children in school uniforms who cross the river every morning on makeshift wooden and plastic rafts to study in Cucuta and then make the return journey in the afternoon.

"I've spent the whole day helping students, mothers, pregnant women across, not charging anything. Sometimes they bring food or give us something (money)," a man who identified himself only as "Larry" told EFE.

Like many others, he preferred not to give his real name due to fear of the criminal gangs that hold sway on the trochas.

A native of the northern Venezuelan state of Miranda, Larry lamented that members of Venezuela's National Guard are not letting their countrymen cross the border into Colombia.

"The guards at the bridge don't let people pass, but eventually one of their relatives will need to get across, and we'll also help them," he said.

Maduro, who is facing a challenge to his leadership from the speaker of the opposition-led National Assembly (unicameral legislature), Juan Guaido, closed the border to keep out deliveries of humanitarian aid, which he said was an attempt to humiliate Venezuela and a Trojan horse that is part of a broader coup attempt.

On February 22nd, Guaido, who had declared himself Venezuela's interim president a month earlier, defied a travel ban and crossed the border into Colombia to coordinate aid deliveries from the United States and other countries.

But the Venezuelan security forces, who remain loyal to Maduro, blocked it from entering.

Around 50 countries, including the US, Germany, the United Kingdom, Colombia and Brazil, say Maduro's re-election victory last year was fraudulent, recognize Guaido as acting president and are calling for new presidential balloting.

Russia, China and India are among the dozens of nations that still regard Maduro as the legitimate president of the South American nation.

Luis Lopez, who arrived in Cucuta from Carache, a town in the western state of Trujillo, said he had to get across to purchase medicine for a family member who is suffering from cancer.

"We tried to cross the bridge but you can't. So we had no choice but to use the trocha to look for medicine for my mother-in-law. We plan to buy it and go back," the 54-year-old told EFE.

While some return from their brief visits to Colombia with food and other basic supplies on their backs, others arrive at the border mired in disappointment.
Geraldine Morales, a Venezuelan who had been working in the Colombian city of Medellin as a manicurist, was forced to return to her homeland because she was unable to find anyone to care for her young son.

"Just thinking about returning changes one's whole mental outlook: going through all this misfortune, having to cross (the border) like this, not even being able to cross over the bridge. It's utterly sad and depressing," Morales told EFE.

Like the others walking along the trochas, the 31-year-old woman said she hopes the situation improves and that the guards once again allow her countrymen across.

Another series of trochas can be found near the Francisco de Paula Santander International Bridge, which also stretches over the Tachira River and links Cucuta with the Venezuelan city of Ureña.

On one of the trails that snake their way through the weeds, a group of Venezuelan volunteers on the Colombian side of the border have been helping people - including some on crutches on in wheelchairs - make their way across.

"For now, this will be our (border) crossing, for coming to shop for groceries, for anything we need, for the sick, for everything," Yorlei Carrillo, who sets off early in the morning to accompany her children - aged eight and 14 - to school in Cucuta, told EFE.

Resigned to the fact the official border bridges will remain closed for now, she is looking on the bright side.

"They say the trochas are dangerous but so far for us they've been a great help and a huge relief."

The 33-year-old, short of breath after crossing the river for the umpteenth time, said she doesn't feel afraid to use the trochas, calling them "everybody's friendly path."

Life on Mars probably not existed on surface, finds study

US labour board challenges Google moves against activist employees