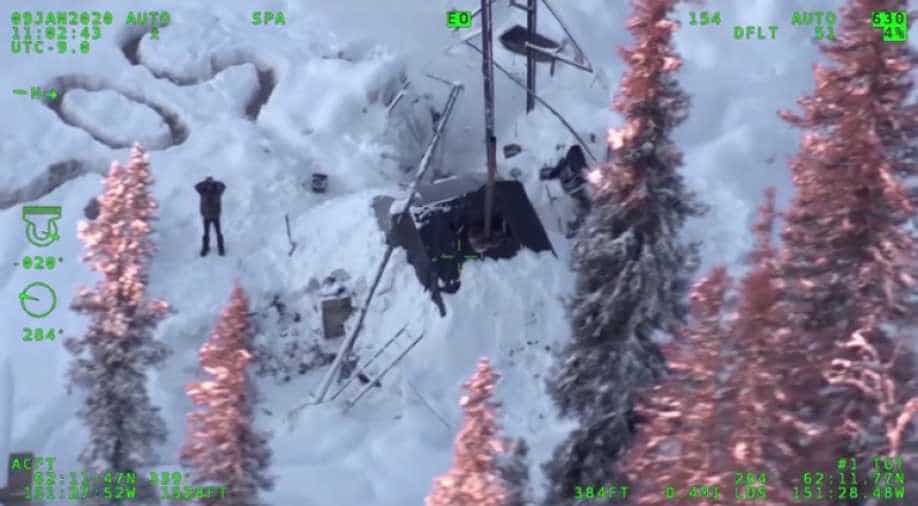 Utah man waving to a helicopter Photograph:( Others )

A video showed that Steele was waving to a helicopter and wrote SOS in capital letters in the snow.

A Utah man who was stuck in Alaska wilderness has been rescued nearly three weeks after his house was burnt down and had almost no food left to survive.

Tyson Steele, 30, was rescued from his remote homestead in the Susitna Valley on Thursday morning, as per a news release by Alaska State Troopers.

A video showed that Steele was waving to a helicopter and wrote SOS in capital letters in the snow.

The 30-year-old later said that he survived on the remnants of canned rations and peanut butter for 22 days after his house was burnt in a fire. He also said that he was sleeping in a snow cave and makeshift shelter that he built around his wooden stove.

Steele told troopers that he earlier living in a lightweight frame, covered in plastic tarps. He also admitted that the fire started because of his "hasty" mistake.

In order to kindle fire, he put a large piece of cardboard into his wooden stove. A flaming piece landed on the roof.

He added that when he woke up in the middle of the night on December 17 or 18 he realized that the plastic was melting.

When he went out of his homestead, he saw that "the whole roof's on fire".

Steele also lost Phil, his dog in the fire.

However, Steele immediately started figuring out a plan for survival. He realised that he has enough canned goods, beans and peanut butter that will last for a month.

The authorities also said that Steele lost his phone in the fire. Steele hoped that his friends or family would have a welfare check for him after they realise that they haven't heard from him for a long time.

Steele slept in a snow cave and later made a better shelter from tarps and lumber.

Steele also said that it was so cold that his urine would "freeze".