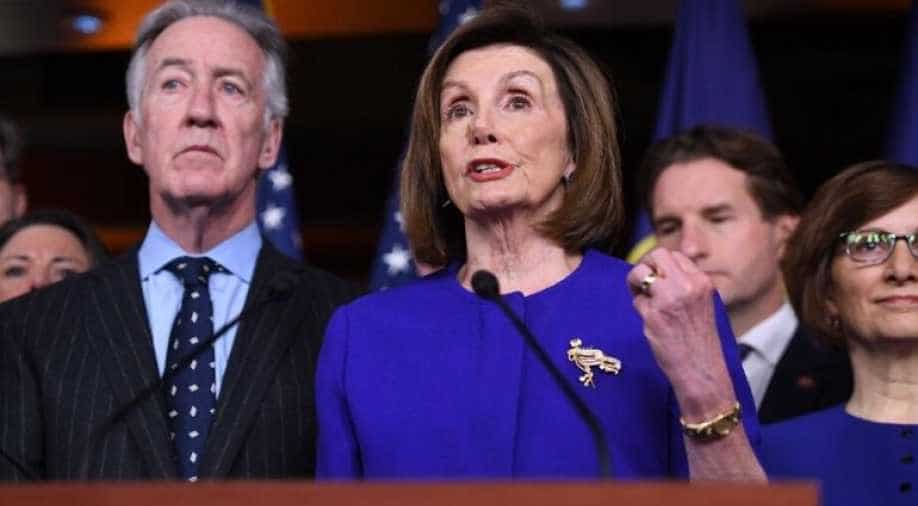 Under NAFTA, the region -- which represents close to 30 per cent of the global economy and is home to nearly 500 million people -- did $1.2 trillion in trade last year.

The United States, Mexico and Canada signed a deal Tuesday to finalize their new trade agreement, paving the way to ratification after more than two years of arduous negotiations.

However, the impeachment trial of President Donald Trump in the US Senate would likely delay Congressional ratification of the agreement until next year, said Senate Majority Leader Mitch McConnell.

In reality, it is the second time the three countries have triumphantly announced the conclusion of the United States-Mexico-Canada Agreement (USMCA), the deal meant to replace the 25-year-old NAFTA, which President Donald Trump complains has been "a disaster" for the US.

First signed in November 2018, USMCA got bogged down in political complications, particularly in the United States, where opposition Democrats questioned whether it would really force Mexico to deliver on labour reforms meant to level the playing field between Mexican and American workers.

But another year of talks produced a series of additions — notably including tougher enforcement of labour provisions — that won the blessing of House Speaker Nancy Pelosi, the key Democrat needed to move the agreement forward, as well as the largest US labour federation, the AFL-CIO.

Mexican President Andres Manuel Lopez Obrador, who presided over the signing ceremony, said the deal "will benefit both Mexican and American workers." He hailed it as a "driver of growth" for all three countries' economies.

The final deal, which must now be ratified in all three countries' legislatures, will replace the 1994 North American Free Trade Agreement, the historic pact that erased nearly all tariffs across the region, deeply integrated its economies and helped turn Mexico into an export powerhouse.

Under NAFTA, the region -- which represents close to 30 per cent of the global economy and is home to nearly 500 million people -- did $1.2 trillion in trade last year.

But Trump bashed NAFTA as "the worst trade deal in the history of the country," blaming it for shipping American jobs south of the border.

He insisted on overhauling it -- a long, fraught process that kicked off in August 2017, and which produced what Trump swaggeringly tweeted "will be the best and most important trade deal ever made by the USA."

Analysts say USMCA is similar to NAFTA in many respects, but there is improved access for US agricultural goods, including dairy products, which Canada, in particular, had tried to limit.

It includes rules designed to improve US auto workers' competitiveness, requiring 40 per cent of each duty-free car to be made by people earning at least $16 an hour.

Besides labour enforcement rules, the additions signed Tuesday include tougher measures to monitor environmental provisions and remove the requirement for the countries to provide at least 10 years of exclusivity for biologic drugs, which blocks cheaper generic versions.

US Trade Representative Robert Lighthizer signed the annexe to the deal in Mexico City along with Canadian Deputy Prime Minister Chrystia Freeland and Mexico's top negotiator on the accord, Jesus Seade.

"It's nothing short of a miracle that we have all come together," Lighthizer said.

"We have accomplished this together at a moment when around the world it is increasingly difficult to get trade deals done," said Freeland.

Down to the wire

The path to ratification now looks clear in all three countries.

Pelosi — acutely aware of the need to win back blue-collar voters the Democrats lost to Trump in 2016 — sought to claim victory over the president by calling the final deal "infinitely better than what was initially proposed by the administration."

Lopez Obrador firmly rejected the initial US proposal for labour inspections, and the deal seemed likely to get mixed up in Trump's impeachment drama and 2020 re-election bid.

Mexico emphasized that there would be no American "inspectors" visiting Mexican factories or businesses, but rather panels of "independent labour experts" which Mexico would help to choose.