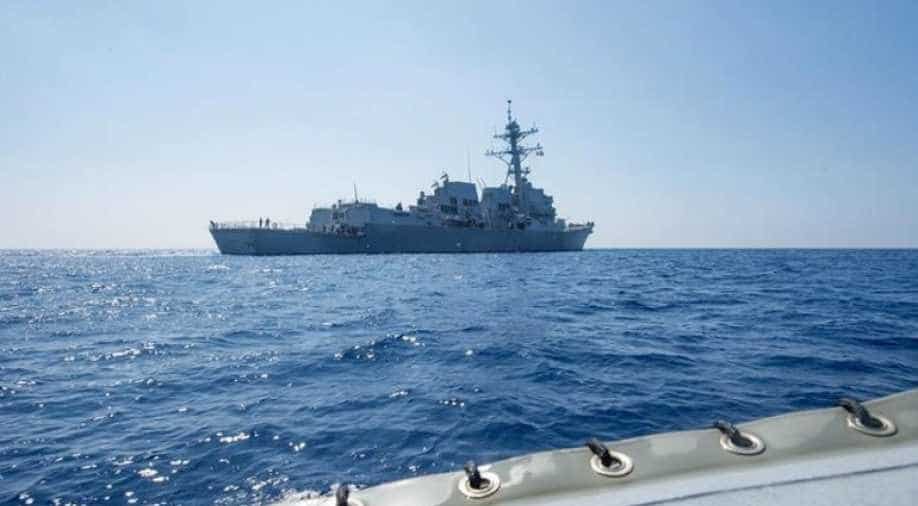 A US warship sailed near a reef claimed by Beijing in the South China Sea on Thursday, a US official said, the first such operation by US President Donald Trump's administration in the disputed waterway.

The guided-missile destroyer's "freedom of navigation operation" is likely to provoke anger from Beijing as the Trump administration attempts to draw support from China on reining in North Korea.

China claims nearly all of the South China Sea, despite partial counter-claims from Taiwan and several southeast Asian nations including the Philippines, Brunei, Malaysia, and Vietnam.

It has rapidly built reefs into artificial islands capable of hosting military planes.

The US has challenged annexations of these islets and advocated for a diplomatic settlement to the disputes.

A Pentagon spokesman, Major Jamie Davis, said US forces operate in the South China Sea on a daily basis and will fly and sail "wherever international law" allows.

"We have a comprehensive Freedom of Navigation Operations program that seeks to challenge excessive maritime claims in order to preserve the rights, freedoms, and uses of the sea and airspace guaranteed to all nations under international law," Davis said in a statement to AFP.

The exercises are "not about any one country, nor are they about making political statements," he added.

According to the Pentagon, the US in 2016 conducted operations "challenging excessive maritime claims of 22 coastal states, including allies and partners."

Pence warning
The US has long argued that Beijing's actions in the South China Sea threaten freedom of navigation and overflight through the strategically vital waters.

China denies these claims, countering that the US is eager to stoke tensions in the region.

Australia and other countries have supported the US exercises, but have so far been unwilling to participate.

During a visit to Japan in April, US Vice President Mike Pence said the United States would defend the right to freedom of navigation through the waterway.

Speaking in January in New Delhi, US Pacific Command Admiral Harry Harris said Washington "will not allow the shared domains to be closed down unilaterally -- no matter how many bases are built on artificial features in the South China Sea."

Last week, Beijing and the Association of Southeast Asian Nations (ASEAN) agreed on a framework for creating a new code of conduct for ships and aircraft operating in the region.

The meeting was attended by ASEAN nations with claims in the region -- the Philippines, Brunei, Malaysia and Vietnam.

Under former President Benigno Aquino, the Philippines had adopted a tough stance on China's claims, which was tacitly backed by the US.

But the country's anger at the world's second largest economy has become a warm embrace following the election last year of President Rodrigo Duterte, who has declined to push China on territorial issues in the hopes of being rewarded with investment and aid.

On Tuesday, Duterte said that Chinese leaders had threatened to go to war over competing claims in the region during a meeting in Beijing. China's foreign ministry later said it would work with Manila to "peacefully" resolve disputes.