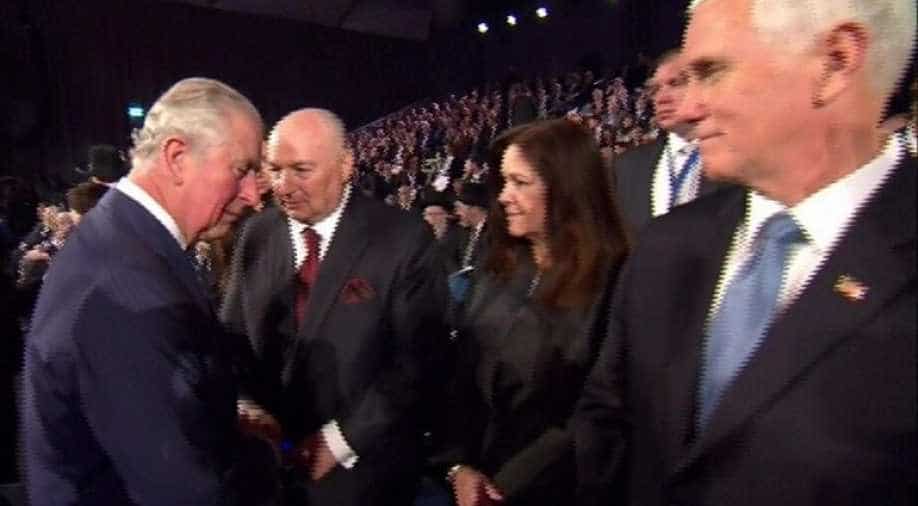 This screen grab from a video released by Yad Vashem Holocaust Remembrance Centre shows Britain's Prince Charles (L) chatting with dignitaries during a ceremony during the Fifth World Holocaust Forum in Jerusalem, as US Vice President Mike Pence (R) looks on, on January 23, 2020. Photograph:( AFP )

The video shows the 71-year-old Prince Charles approaching Pence and moving straight past him after staring at him for a brief moment, to greet Israeli Prime Minister Benjamin Netanyahu.

US Vice President Mike Pence was deliberately ignored by Prince Charles at the Holocaust memorial ceremony in Jerusalem, but the Buckingham Palace has dismissed such suggestions and argued that the two had a "warm and friendly chat" before the event.

A viral video which has been making the rounds on various social media platforms shows the Prince in conversation with various dignitaries at the ceremony, which was being held at the Yad Vashem Holocaust Memorial Centre in Jerusalem.

The video shows the 71-year-old Prince Charles approaching Pence and moving straight past him after staring at him for a brief moment, to greet Israeli Prime Minister Benjamin Netanyahu.

The office of the Prince of Wales issued a statement, "Shortly before the Yad Vashem memorial event began, the prince and Vice President Pence had a warm and friendly chat, which is why they did not greet each other again in the room."

Prince Charles warned in his address to the ceremony that "the lessons of the Holocaust are still relevant to this day," which was received by more than 40 Heads of State on a day that marks 75 years since the liberation of the Nazi death camp in Auschwitz.