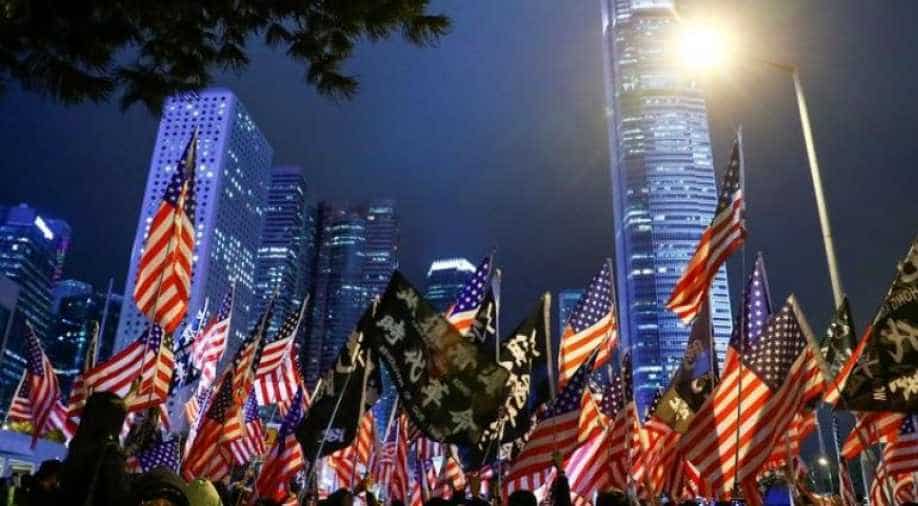 US and Hong Kong Photograph:( Reuters )

US and UK raised Hong Kong issue at the top UN body after China passed a new security law which gives Beijing more control over the region.

Months after China raised Kashmir issue at the behest of Pakistan at the United Nations Security Council informally, Hong Kong issue was raked up by US and UK at the council informally much to the chagrin of Bejing.

US and UK raised Hong Kong issue at the top UN body after China passed a new security law which gives Beijing more control over the region. This was the first time Hong Kong was raked up at the council since the UN came to existence in 1945.

The Chinese mission in UN in a strongly worded statement said, "Hong Kong is a special administrative region of China and Hong Kong affairs are purely China's internal affairs and allow no external interference.''

Back then, India had also asked China and Pakistan not to raise internal matter Kashmir at the world body.

Much like what New Delhi said back then, it was Bejing repeating the same sentences word by word. The Chinese mission to UN in a series of tweet said, "attempt of US and UK to discuss the Hong Kong issue in UNSC failed" since "no agreement, no open video conference meet, no formal discussions by members and no outcome" happened.

August 2019 saw Kashmir being raised in the same manner, informally, with no outcome, no agreement but Pakistan who had insisted for it had turned a blind eye to it and termed it as "diplomatic victory".

US Representative to the United Nations Ambassador Kelly Craft at the meet on Friday in which Hong Kong was raised said, "Are we going to allow the Chinese Communist Party to violate international law and force its will on the people of Hong Kong who look to us to preserve their way of life and their freedoms?"

Chargé d'affaires of UK's mission to UN Ambassador Jonathan Allen said, "This legislation risks curtailing the freedoms that China has undertaken to uphold as a matter of international law."

In 1997 when British handed over Hong Kong to China, the territory has been governed under “one country, two systems” and under 1984 joint British-China declaration high degree of autonomy will be given to Hong Kong for 50 years after the handover.

The Declaration has been registered with the UN. Though details of the new law passed by Bejing is not known, it can bypass the parliament of Hong Kong and thus erode the established “one country, two systems” principle.