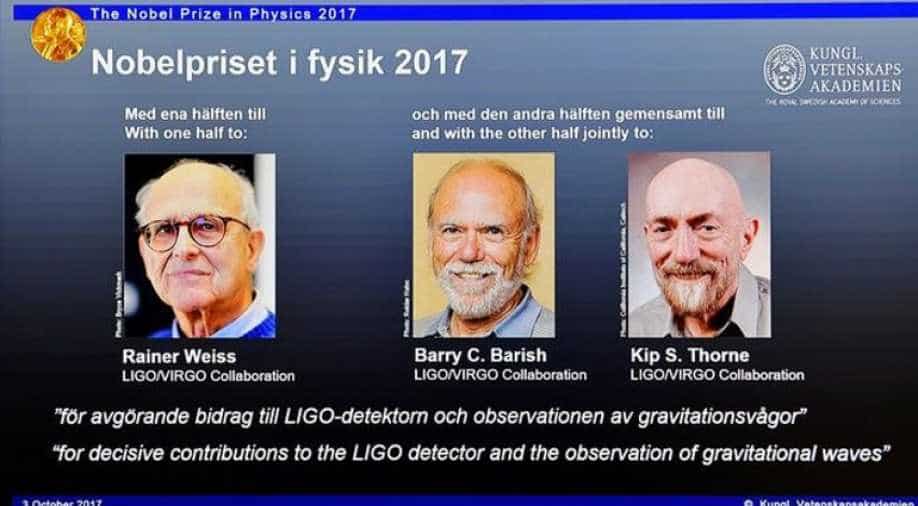 Predicted by Albert Einstein a century ago as part of his theory of general relativity, but only detected in 2015, gravitational waves are 'ripples' in space-time, as the theoretical fabric of the cosmos is called. Photograph:( Reuters )

US astrophysicists Barry Barish, Kip Thorne and Rainer Weiss were awarded the Nobel Physics Prize on Tuesday for the discovery of gravitational waves -- a phenomenon that opens a door on the extreme Universe.

Predicted by Albert Einstein a century ago as part of his theory of general relativity, but only detected in 2015, gravitational waves are "ripples" in space-time, as the theoretical fabric of the cosmos is called.

They are caused by ultra-violent processes, such as colliding black holes or the collapse of stellar cores.

"Their discovery shook the world," said Goran K Hansson, the head of the Swedish Royal Academy of Sciences which selects the Nobel recipients.

They made their discovery in September 2015 and announced it in February 2016, a historic achievement that culminated from decades of scientific research.

And since then, they have clinched all the major astrophysics prizes to be had.

Thorne and Weiss co-created the Laser Interferometer Gravitational-wave Observatory (LIGO) at the prestigious California Institute of Technology, which has taken home 18 Nobels since the prizes were first awarded in 1901. Barish then brought the project to completion.

The first-ever direct observation of gravitational waves was the result of an event some 1.3 billion light-years away.

"Although the signal was extremely weak when it reached Earth, it is already promising a revolution in astrophysics. Gravitational waves are an entirely new way of following the most violent events in space and testing the limits of our knowledge," the Academy said.

Cosmic chirp
Since 2015, the enigmatic ripples have been detected three more times: twice more by LIGO and once by the Virgo detector located at the European Gravitational Observatory (EGO) in Cascina, Italy.

"Gravitational waves spread at the speed of light, filling the Universe, as Albert Einstein described in his general theory of relativity. They are always created when a mass accelerates, like when an ice-skater pirouettes or a pair of black holes rotate around each other," the Nobel jury explained.

"Einstein was convinced it would never be possible to measure them. The LIGO project's achievement was using a pair of gigantic laser interferometers to measure a change thousands of times smaller than an atomic nucleus, as the gravitational wave passed the Earth."

Black holes emit no light and therefore can only be observed through the gravitational waves.

After two black holes collide, they leave behind a single rotating black hole with no traces visible of its dramatic inception.

"Gravitational waves, which rythmically stretch and squeeze space, change tone as their message alters. If we could hear all the waves and not only the strongest ones, the entire universe would be full of music, like birds chirping in a forest, with a louder tone here and a quieter one there," the Academy said.

Last year, British scientists David Thouless, Duncan Haldane and Michael Kosterlitz were honoured for their groundbreaking research on topology, or unusual phases or states of matter, which may one day yield superfast computers.

The physics prize is the second of the 2017 Nobels awarded, after the medicine prize on Monday went to three American geneticists -- Jeffrey C. Hall, Michael Rosbash and Michael W. Young -- for shedding light on the biological clock that governs the sleep-wake cycles of most living things.

The chemistry prize will be announced on Wednesday, the literature prize on Thursday and the peace prize on Friday. The economics prize will wrap things up on Monday, October 9.