US subsidising militaries of rich countries, Mattis did not see it as a problem: Trump 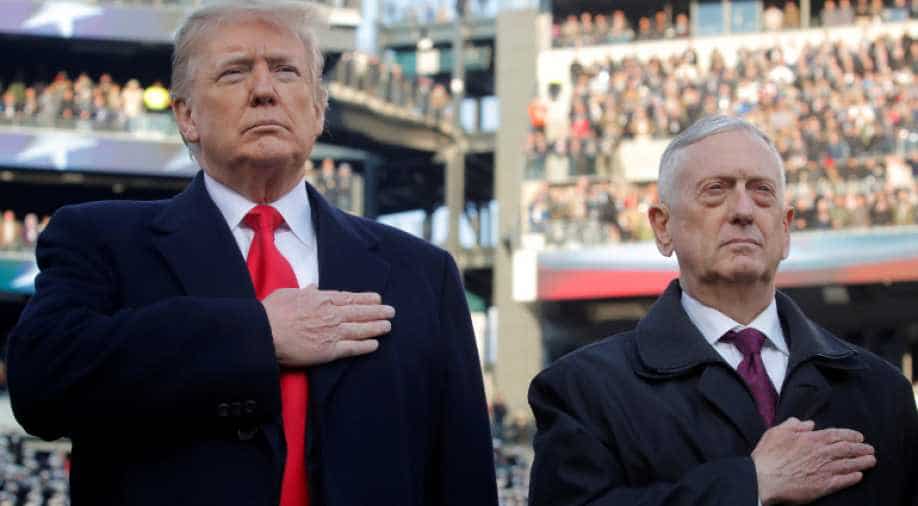 Mattis had put in his papers on Thursday in a surprise move which caught the Pentagon off guard.

Just days after US defence secretary Jim Mattis quit the cabinet, President Trump in a tweet said today that the US was substantially subsidising militaries of "many rich countries" all over the world which "General Mattis did not see as a problem."

Trump said "at the same time these countries take total advantage of the US and our taxpayers."

To those few Senators who think I don’t like or appreciate being allied with other countries, they are wrong, I DO. What I don’t like, however, is when many of these same countries take advantage of their friendship with the United States, both in Military Protection and Trade...

Trump declared that he saw the issue as a "problem", adding, "it is being fixed!"

....We are substantially subsidizing the Militaries of many VERY rich countries all over the world, while at the same time these countries take total advantage of the U.S., and our TAXPAYERS, on Trade. General Mattis did not see this as a problem. I DO, and it is being fixed!

Mattis, 68, had put in his papers on Thursday in a surprise move which caught the Pentagon off guard. In his resignation letter, Mattis had said that his view wasn't aligned with the president, while asserting that he was clear-eyed on "malign actors and strategic competitors being strongly held".

Trump had initially said Mattis was "retiring with distinction, at the end of February", however, in an abrupt U-turn on Sunday the president said he was replacing Mattis two months earlier than had been expected with reports indicating that he was miffed with him due to the harsh tone of the resignation letter which was made public to media organizations.

In his resignation letter, Mattis had said he would step down at the end of February to allow for a successor to be confirmed and to attend congressional hearings and a key NATO meeting.

However, Trump said that deputy defence secretary Patrick Shanahan would take over from Mattis on an "acting basis" on January 1st, 2019.

"He will be great!" Trump said about Shanahan.

Meanwhile, outgoing defence secretary James Mattis signed an order withdrawing US forces from Syria, a Defense Department spokesman said, after President Trump announced last Wednesday that America's mission in Syria was over, a hot-button issue with Mattis who did not see explicitly agree with Trump's move.