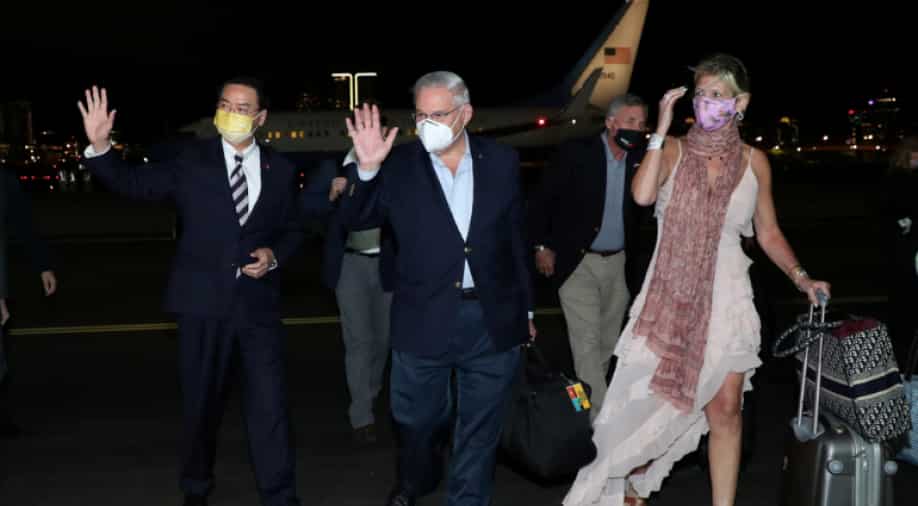 Bob Menendez, chairman of the US Senate Foreign Relations Committee, and other members of the US delegation arrive at Taipei Songshan airport in Taipei, Taiwan Photograph:( Reuters )

US Senator Lindsey Graham has said that China should pay a greater price for backing Russia's invasion of Ukraine.

"We are going to start making China pay a greater price for what they are doing all over the world. The support for (Russian President Vladimir) Putin must come with a price," he said during a meeting with Taiwan President Tsai Ing-wen.

Graham is the head of a US delegation that is visiting Taiwan after increased fears that China will use the Ukraine crisis as an excuse to attack Taiwan.

Honored to be in #Taiwan where freedom reigns.

The courageous people of Taiwan 🇹🇼 are great allies of the United States 🇺🇸 and a beacon of freedom in a troubled region. https://t.co/MjzLmJ2jJW

China claims that Taiwan is a part of it under its ''one China''policy. But the democratic island has shown resistance.

Chinese President Xi Jinping has warned countries not to recognise the independence of Taiwan and said that Beijing can seize by force if it is disobeyed.

Under the 'Taiwan Relations Act', the United States is bound to ''provide Taiwan with arms of a defensive nature'' and ''resist any resort to force or any other forms of coercion that would jeopardise the security of Taiwan.''

"To abandon Taiwan would be to abandon democracy and freedom... it would reward the worst in humanity," Graham said.

"Those who wish Taiwan ill must understand that the global community will look at that and say we cannot allow Taiwan to be negatively impacted because the world's interests are involved."

"We have a strong military not to take other people's properties but to protect our freedom and the freedom of the world," he added.

Meanwhile, China conducted military drills around Taiwan saying "This operation is in response to the recent frequent release of wrong signals by the United States on the Taiwan issue."

"The US bad actions and tricks are completely futile and very dangerous. Those who play with fire will burn themselves," it added.