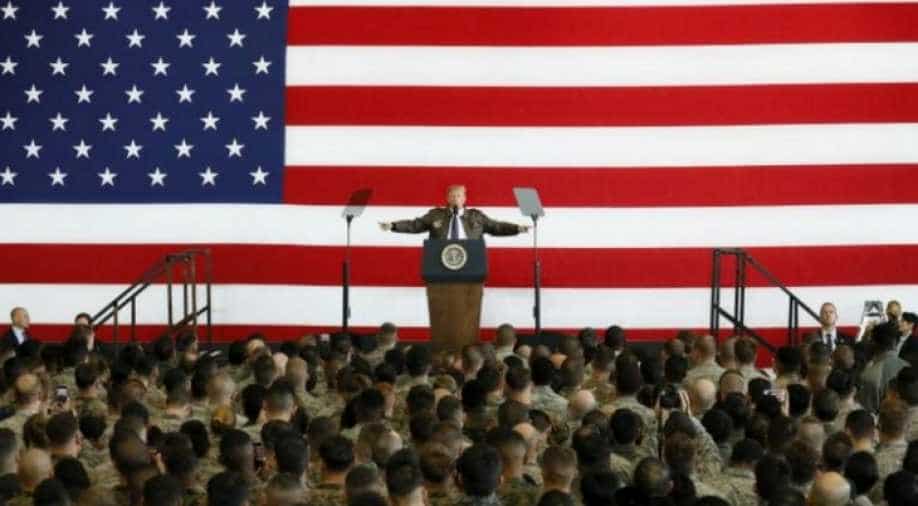 Speaking to cheering military personnel at Yokota Air Base just west of Tokyo, Trump donned a bomber jacket and issued a threat that 'no one, no dictator, no regime and no nation should underestimate american resolve.' Photograph:( Reuters )

US President Donald Trump departed Washington for an almost two week trip to Asia Friday, leaving a trail of invective and scandal that risks overshadowing efforts at top-level diplomacy.

Trump left Joint Base Andrews bound for Hawaii - where he will receive a briefing from United States Pacific Command - before travelling on to Japan, South Korea, China, Vietnam and the Philippines.

But before climbing the steps of Air Force One, Trump unleashed a Twitter barrage, pillorying his own Justice Department and calling for his former political opponents to be prosecuted.

"A lot of people are disappointed in the Justice Department, including me," Trump later said, complaining they were probing his campaign's ties to Russia but not adequately investigating his former Democratic rival Hillary Clinton.

"There was no collusion, there was no nothing. It's a disgrace, frankly, that they continue."

His comments dealt a fresh blow to the traditional barriers between the executive and the judicial system, breaking the taboo over presidential interference with investigations.

Trump will meet China’s Xi Jinping, Japan's Shinzo Abe and other Asian leaders with his standing at home dramatically weakened by series of indictments against former campaign aides.

Mueller also revealed that a Trump campaign aide George Papadopoulos had lied to the FBI about his contacts with Kremlin-connected officials, but then turned informant.

Trump said he did not recall a campaign encounter with Papadopoulos, during which the young aide proposed a meeting between Trump and Russian President Vladimir Putin.

New indictments are rumoured to be on the way, perhaps within days.

While he is away Republican lawmakers will also be working furiously to pass tax cuts that are make-or-break for his legislative agenda.

And there will also be gubernatorial elections in Virginia and New Jersey seen - in part - as a gauge of his popularity.

Trump tried to seize on Democratic infighting ahead of those votes, fired up by explosive revelations from a top Democratic operative that the 2016 presidential primaries were tipped in Clinton`s favor.

Trump’s trip itself had already promised to be anything but easy.

The main foreign policy item on the agenda will be efforts to contain or roll back North Korea's ballistic and nuclear missile programs.

It is the longest presidential tour of Asia since George HW Bush visited in late 1991 and early 1992.

That culminated in the 41st president fainting and vomiting at a banquet in Japan.

Trump used his departure to announce that the already marathon trip will be extended to include an East Asia Summit in the Philippines, which he had been slated to miss.