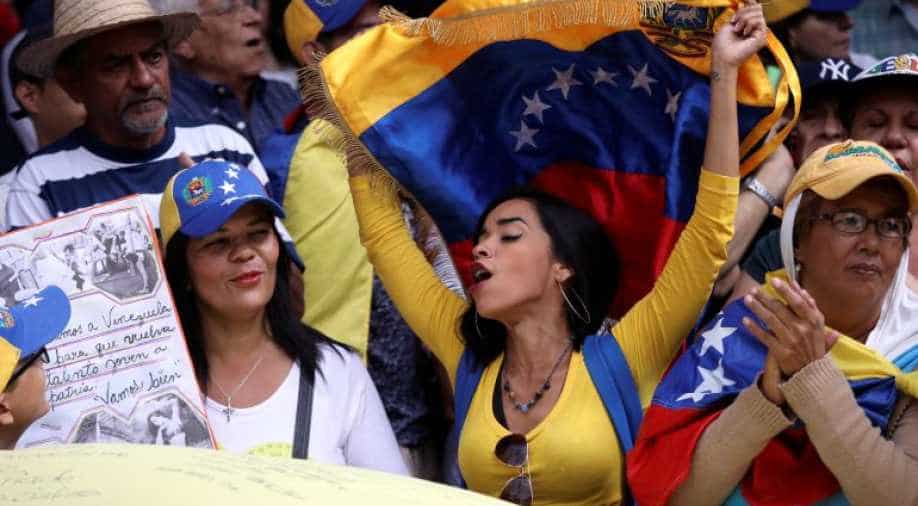 File photo: Opposition supporters take part in a rally to commemorate the Day of the Youth and to protest against Venezuelan President Nicolas Maduro's government in Caracas, Venezuela February 12, 2019. Photograph:( Reuters )

Mourao's comments came after Venezuela President Nicolas Maduro announced earlier that the border with Brazil would be shut 'completely and absolutely' until further notice.

Brazil Vice President Hamilton Mourao on Thursday dismissed US threats of military intervention in Venezuela as "premature" and said it "wouldn't make sense."

"I think they're more in the realm of rhetoric than action," Mourao said, referring to the threats, in an interview with AFP.

"The Venezuela question needs to be resolved by Venezuelans."

Mourao's comments came after Venezuela President Nicolas Maduro announced earlier that the border with Brazil would be shut "completely and absolutely" until further notice from 8:00 pm.

But Mourao said that "doesn't signify an act of aggression."

"This reaction is simply a way to prevent the humanitarian aid process," he said, adding that Venezuela "has the right to whatever it wants on its side of the border."

Maduro's move came two days before a deadline set by opposition leader Juan Guaido for humanitarian aid stockpiled in Colombia, Brazil and the island of Curacao to be brought into Venezuela.

The self-proclaimed acting president, recognized as such by 50 countries, set out in a convoy of vehicles from Caracas towards the border with Colombia on Thursday to personally take charge of the aid entry.

A bridge border crossing between the two countries remains blocked by the military, though, with Maduro vowing not to let it in.

The embattled socialist leader also said on Thursday he was considering "a total closure of the border with Colombia."

The issue of aid has taken center stage in the power-struggle between Maduro and Guaido, the president of the opposition controlled National Assembly legislature.

Guaido has branded Maduro a usurper over his controversial reelection last May in polls boycotted by the opposition, many of whose leaders were unable to stand due to being imprisoned, barred or in exile.

The 35-year-old Guido wants to force out Maduro, 56, so he can set up a transitional government ahead of new elections.