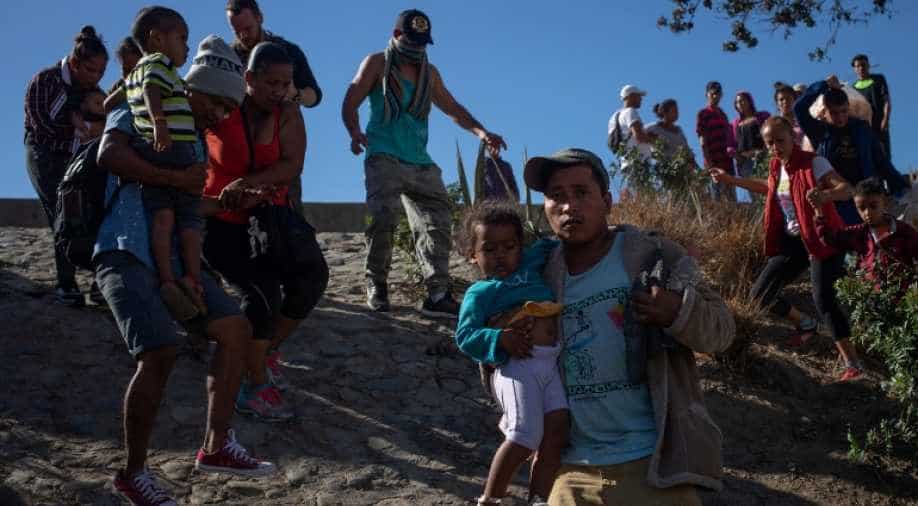 It comes amid a surge in the number of families and unaccompanied children crossing the US border from Mexico illegally, most of them fleeing poverty and violence in Central America. Most request asylum.

The administration of US President Donald Trump has asked the Department of Defense to prepare to house up to 5,000 unaccompanied migrant children amid what it calls a mounting "crisis" at the US-Mexico border, the Pentagon said Thursday.

"DoD will work with the military services to identify potential locations for such support, and will work with HHS to assess any DoD facilities or suitable DoD land for potential use to provide temporary shelter for unaccompanied alien children," he said.

The request for beds is preventative -- they will not definitely be used.

But it comes amid a surge in the number of families and unaccompanied children crossing the US border from Mexico illegally, most of them fleeing poverty and violence in Central America. Most request asylum.

According to the Customs and Border Protection Agency (CBP), the number of minors apprehended after entering the country illegally without family in February hit 6,825, up from 5,119 in January and 4,968 in October.

CBP hands the children over to HHS's Administration for Children and Families, which seeks to place them with relatives or other families in the United States while their requests to remain in the country are processed, which can take two years.

The Administration for Children and Families said Thursday that they currently have about 11,500 such children in custody.

The figure changes daily, they said, because of new referrals from Homeland Security and releases of children to sponsors.

Customs and Border Patrol Commissioner Kevin McAleenan said Tuesday that illegal immigration in February surged to the highest level in years, with 76,000 people stopped or apprehended, and was straining government facilities.

"We are currently facing a humanitarian and national security crisis along our southwest border," he said.

"The vast increases in families and children coming across our border, in larger groups and in more remote areas, presents a unique challenge to our operations and facilities, and those of our partners."

On Wednesday Homeland Security Secretary Kirstjen Nielsen said they were expecting the numbers to grow in the coming months.

Nielsen though said in many cases the children were being used as "pawns" to get into our country, and even "recycled" by smuggling rings to help multiple groups cross the border and get a foothold on US soil.

She said she sympathized with the migrants but insisted that, as Trump formally declared last month, "It is an emergency."