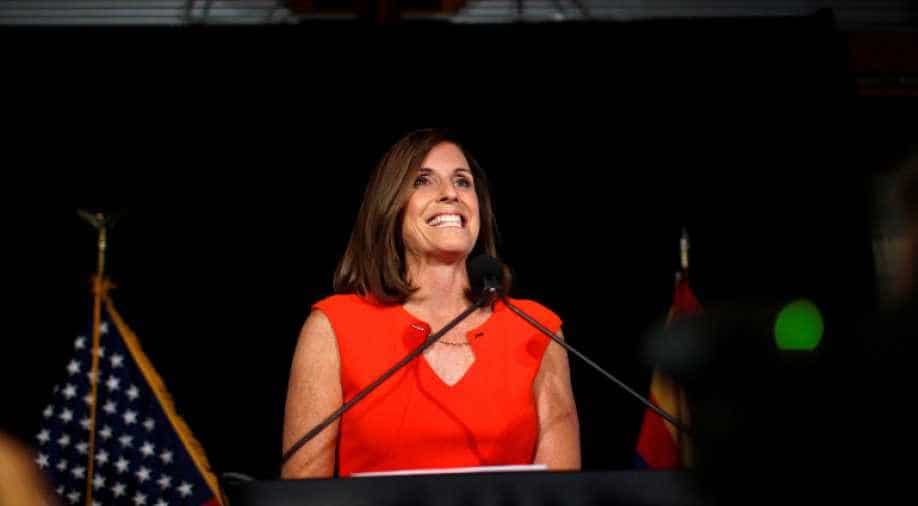 Sinema won by taking a slice of Republican voters including women.

Arizona Republican Martha McSally conceded defeat in the race for US Senate seat to her Democratic opponent Kyrsten Sinema.

In a hotly contested ballot, Sinema won by taking a slice of Republican voters including women. The Senate seat was vacated by Republican Jeff Flake, a Trump critic. Sinema has become the first woman in Arizona's 106-year-old history to take the US Senate seat.

Sinema will also be the youngest Senator in the 100-member chamber.

"I just called Kyrsten Sinema and congratulated her on becoming Arizona's first female senator after a hard-fought battle," McSally said in a video statement posted on Twitter.

Congrats to @kyrstensinema. I wish her success. I’m grateful to all those who supported me in this journey. I’m inspired by Arizonans’ spirit and our state’s best days are ahead of us. pic.twitter.com/tw0uKgi3oO

The winner, Democrat Kyrsten Sinema, 42, thanked Arizonans and said that she would work to see "common humanity and find common ground". Sinema had expanded her lead each of the last four days. On Sunday evening, Sinema held a lead of 38,197 votes, or 1.72 percentage points.

As long as I’ve served Arizona, I’ve worked to help others see our common humanity & find common ground. That’s the same approach I’ll take to representing our great state in the Senate, where I’ll be an independent voice for all Arizonans.

Thank you, Arizona. Let’s get to work. pic.twitter.com/iX6u6VQ9bQ

President Trump had earlier raised doubts over the counting process in Arizona as poll officers took to counting ballots.

"Just out - in Arizona, SIGNATURES DON'T MATCH. Electoral corruption," Trump said on Twitter, adding,"Call for a new Election? We must protect our Democracy!"

There are other Senate battles taking place in Florida and Mississippi which have become too close to call.

In Florida, authorities are conducting a recount for the seat held by Democratic Senator Bill Nelson who is fighting against Republican Rick Scott.

The Mississippi Senate race is headed for a run-off between Republican Cindy Hyde-Smith and Democrat Mike Espy. Mississippi hasn't sent a Democrat to the US Senate since 1982.

As the ballot was being counted, President Trump on Monday urged Florida election officials to end the recount and declare Republican candidates the winners.

"The Florida Election should be called in favour of Rick Scott and Ron DeSantis in that large numbers of new ballots showed up out of nowhere, and many ballots are missing or forged. An honest vote count is no longer possible-ballots massively infected. Must go with Election Night!" Trump said on Twitter.