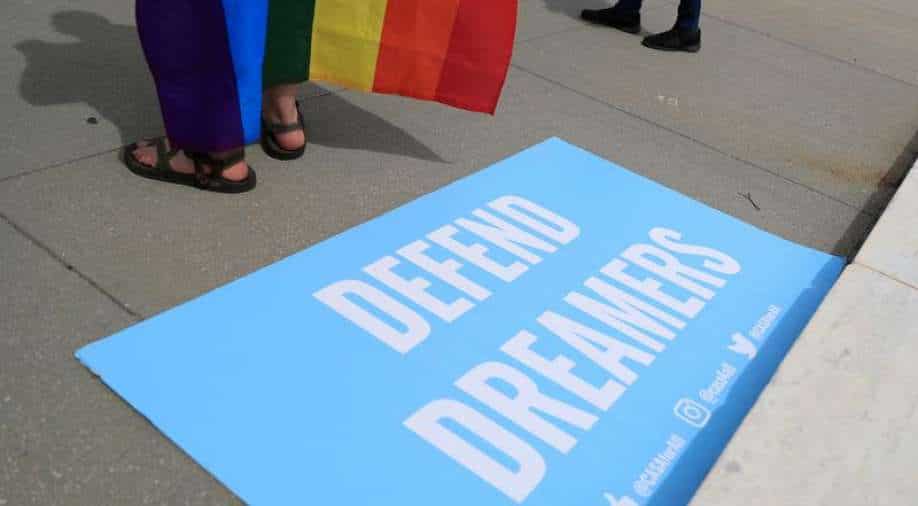 FILE PHOTO: A sign in support of DACA Dreamers lies at the steps of the US Supreme Court Photograph:( Reuters )

US District Judge Nicholas Garaufis asked the Trump administration Friday to fully reinstate the programme that protects from deportation immigrants who came to the country illegally as children.

The Trump administration must accept new applications for the Deferred Action for Childhood Arrivals (DACA) programme that protects young immigrants from deportation, a federal judge in the United States has ruled.

US District Judge Nicholas Garaufis asked the Trump administration Friday to fully reinstate the programme that protects from deportation immigrants who came to the country illegally as children. He added the government had to post a public notice within three days that new DACA applications were being accepted.

The ruling follows one from November where Garaufis said Acting Department of Homeland Security Secretary Chad Wolf was unlawfully in his position.

As part of his crackdown on all kinds of immigration, Trump moved to end the program in 2017, calling it unconstitutional. The case ended up in the US Supreme Court, which ruled in June that the Trump administration had not followed proper administrative procedures to end the policy.

But in response, the Department of Homeland Security reinstated it only partially. It limited DACA to those already enrolled, rather than allow new applicants as well. And it cut the length of DACA permit renewals to one year, rather than the two years the program had allowed.

On Friday, the judge said that invalidated the memo Wolf had issued in July suspending DACA for new applications and reducing how long renewals were valid from two years down to one year.

Garaufis said Homeland Security must announce the full reinstatement of DACA on its website by Monday.

More than 300,000 new applicants could now be eligible for DACA, the Center for American Progress think tank said.

President-elect Joe Biden has vowed to restore DACA when he takes office in January.