US immigration ban: Trump unfazed as protests increase across US 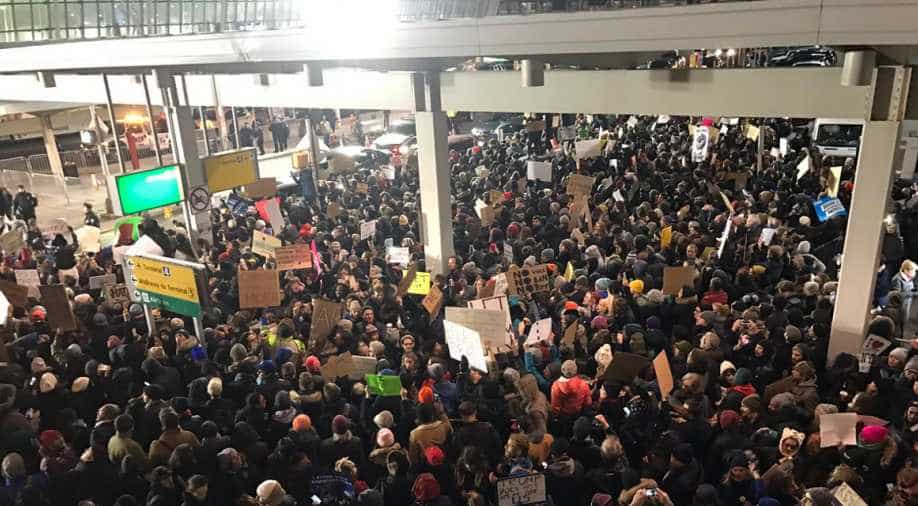 Even as leaders across the world expressed their concern over his immigration ban and more than hundred thousand people protested at airports across the US, Donald Trump remained unfazed, tweeting "Our country needs strong borders and extreme vetting."

Our country needs strong borders and extreme vetting, NOW. Look what is happening all over Europe and, indeed, the world - a horrible mess!

Christians in the Middle-East have been executed in large numbers. We cannot allow this horror to continue!

Federal courts began stepping in as requests for stays of Trump's actions were sought.

Sending those travellers back to their home countries following Trump's order exposes them to "substantial and irreparable injury," she wrote in her decision.

Her ruling was followed by similar decisions by federal judges in Virginia, Seattle and Boston.

Partial relief to those detained at airports or in transit came as US judge Ann Donnelly in an order temporarily halted removal of individuals detained in the country.

Immigrants, even those holding green cards, were held and banned from flying into the US. Several individuals, who had valid US visas and green cards and who had travelled abroad for work or on personal visits were also impacted.

Crowds stood outside the arrival terminal of New York's bustling John F Kennedy international airport, raising slogans against Trump's order suspending entry of all refugees to the US for 120 days, barring Syrian refugees indefinitely and blocking entry into the country for 90 days for citizens of Iran, Iraq, Libya, Somalia, Sudan, Syria and Yemen.

Similar scenes of chaos and protests were witnessed at other key ports of entry in Boston, Los Angeles and in Houston.

Helpless individuals, whose family members were not allowed to board flights to the US expressed their anger on social media.

"Three weeks ago my wife and my newborn daughter went to Iran so that she can visit her grandparents for the first time. It is not clear they can come back to the US. And this feeling eats me alive," an individual Amin Karbasi, who one person pointed out was a professor at Yale University, wrote on Twitter.

British Olympic champion Mohamed Farah condemned the curbs on immigrants and visitors as coming "from a place of ignorance and prejudice" which seemed to make him an "alien" in the United States, where he trains and lives with his family.

"On 1st January this year, Her Majesty the Queen made me a Knight of the Realm," Farah said in a statement on his Facebook account. "On 27th January, President Donald Trump seems to have made me an alien."