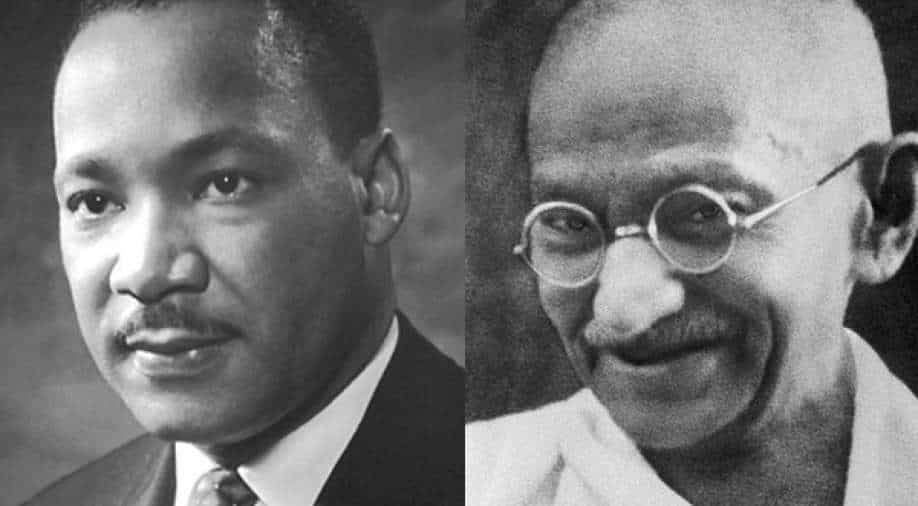 In 2009, Congressman Lewis led a congressional delegation visit to India to commemorate the 50th Anniversary of Dr King Jr's pilgrimage to India.

The US House of Representatives has passed legislation that would establish an exchange initiative between the US and India to study the work and legacies of Mahatma Gandhi and Martin Luther King Jr.

Written by civil rights icon John Lewis, who died early this year, and co-sponsored by Indian-American Congressman Ami Bera, the Gandhi-King Scholarly Exchange Initiative Act authorises the State Department, in cooperation with the Indian government, to establish an annual educational forum for scholars from both countries that focuses on the legacies of Mahatma Gandhi and Martin Luther King Jr.

This legislation honours the long-standing relationship between the US and people of India and advance his teachings and establish a development foundation that would allow India and the US to work together to address pressing issues like climate change, education and public health, Congressman Eliott Engel, Chairman of the House Foreign Affairs Committee, said on the House floor on Thursday.

Just like Gandhi and Dr King, Congressman Lewis shaped the world through his actions of non-violence and his commitment to human rights, equality, and justice for all.

The Gandhi-King Scholarly Exchange Initiative Act is a fitting tribute to the incredible life and legacy of John Lewis, said Bera, the longest-serving Indian American lawmaker.

As the world's oldest and largest democracies, the US and India have long traditions of upholding these shared values championed by figures like Gandhi, King, and Congressman Lewis, he said.

But they are increasingly under threat in both countries.

I'm proud the House of Representatives passed this legislation, which will help these values endure and remind us that by holding true to them, we embody and live up to the best of our two nations, Bera said.

In 2009, Congressman Lewis led a congressional delegation visit to India to commemorate the 50th Anniversary of Dr King Jr's pilgrimage to India.

Inspired by his visit, Congressman Lewis created the Gandhi-King Exchange Act to seek to apply the philosophies of Gandhi and Dr King Jr.

The legislation also authorises to develop a professional development training initiative on conflict resolution based on the principles of non-violence; and establish a foundation to address social, environmental, and health priorities in India.

The measure authorises USD one million a year through fiscal 2025 for the Gandhi-King Scholarly Exchange Initiative.

The development foundation would also be authorised at USD 15 million per year from 2022 through 2025 - but only if India's private sector commits to match US government contributions.

The Congressional Budget Office (CBO) estimates that the bill would cost USD 51 million over five years.

Congressman Michael McCaul said that after years of working with India to address their development challenges, the United States has seen impressive results.

"The best results so far is that India which once was a recipient of foreign aid is now a donor.

This is true when it comes to improving water sanitation, increasing education and empowering women," McCaul said.