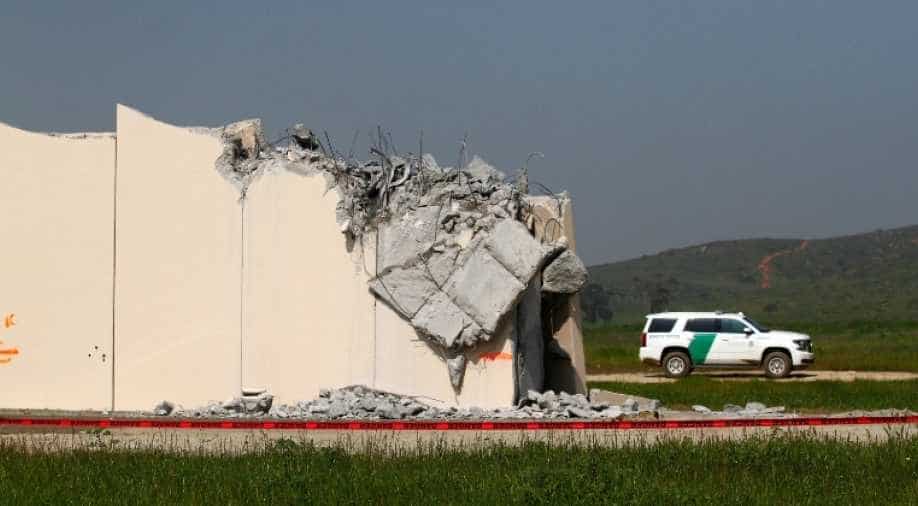 The eight models of concrete and steel were unveiled in October 2017, at a cost of more than $300,000 each, on the edge of San Diego at the border with Tijuana, Mexico.

President Donald Trump's border wall with Mexico has yet to be built and, on Wednesday, US authorities began demolishing the prototypes constructed for it in California 16 months ago.

The eight models of concrete and steel were unveiled in October 2017, at a cost of more than $300,000 each, on the edge of San Diego at the border with Tijuana, Mexico.

Trump himself inspected the 30-feet (nine-meter) full-scale models erected side-by-side when he visited California in March last year and pushed his signature campaign promise of a wall along the Mexican border.

He says the barrier is needed to keep out illegal immigrants, criminal gangs and drug traffickers.

The prototypes were built for testing and evaluation, which has now been completed, a Customs and Border Protection official said.

"They have served their purpose and are now being removed" while a new "secondary bollard wall" will go up in the same location, the official said.

Construction workers used machinery to knock down seven of the prototypes but were unable to topple the last one.

"They woke us up early when they were drilling," said a Tijuana resident who lives a few meters from the border, where the prototypes had become an attraction for tourists in Tijuana.

Unable to obtain all the congressional funding he seeks for his wall, Trump declared a "national emergency" that would enable him to find billions of dollars from other sources, in particular, the Pentagon budget for military construction.

On Tuesday the Democrat-controlled House of Representatives struck down the emergency declaration, which will also be considered by the Senate, which is controlled by Trump's Republican party.